The Iron-Fisted Monk (1977) is Hung’s directorial debut and the film that many credit for introducing many of the choreographic and editing techniques that would go on to redefine the martials arts action film industry follows the story of a Shaolin monk who fights against the oppressive Manchus who have come into town raping and pillaging. A darker and more violent martial arts film than what was common at the time, Hung’s film featured two controversial rape scenes, perhaps one too many to setup up the terror being perpetrated by the main antagonist, the Manchu official (Fung Hark-On). That said, it’s a great directorial debut with fascinating choreography and lots of kinetic energy that keeps the story flowing along with unforced comedic elements, a style Hung would come to perfect.

The Magnificent Butcher (1979)  was not directed by Hung, but directed by Yuen Woo-ping (Drunken Master), and stars Sammo Hung as “Butcher” Lam Sai-wing, a pupil of Wong Fei-hung (the role Jackie Chan played in Drunken Master, but here played by Kwan Tak-hing). Butcher is embroiled not only in an abduction but finds himself framed for murder and having to train under the legendary Drunken Master in order to fight the real murderer and win, to clear his name. Like previous Drunken Master films, this one leans heavily on comedy and isn’t always easy to follow, but the quick pacing and the choreography of the martial arts will have genre fans more than satisfied.

Finally, Eastern Condors (1987) is Hung’s tribute to The Dirty Dozen and arguably his greatest film in terms of plot, action, and cinematography. Ten Chinese American convicts are enlisted and trained to go on a covert mission into Vietnam to destroy a top-secret munitions dump, but the mission goes awry before the group even land behind enemy lines. We get great, high-paced action sequences, fantastic choreography, and some beautiful cinematography with eye catching color tones. Eureka provides the film totally uncut for the first time in the UK. 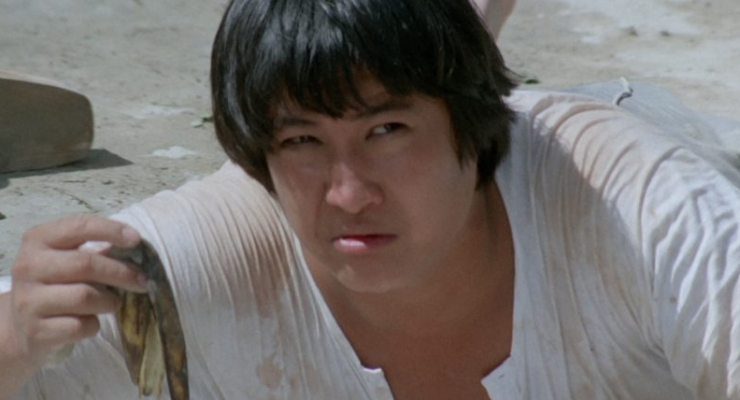 All three films in the Three Films with Sammo Hung collection have been restored in 2K and appear in a 2.35:1 AVC 1080p encodement. They are all remarkably consistent in quality given the span of years that separates them. Each film has a beautiful film grain structure that looks organic with very little source damage, a consistent black level with little to no washout in the shadows and vibrant colors that aren’t oversaturated. Eastern Condors (1987) is the standout, with wonderfully nuanced and extended shadow details and excellent ‘pop’ in the explosions and gunfire. It would make an excellent candidate for a 4K restoration with HDR.

I based my review mostly on the original monaural mixes and only sampled the other mixes randomly. The original mixes sound good enough, while they do show the limitations of their equipment, with some boxy sounding dialogue and limited dynamic range.

The archival interviews with Sammo Hung, some parts of them repeated across each disc, are interesting to watch, but the audio commentaries yield the most information.

Three Films with Sammo Hung includes three kung-fu classics in what are fantastic new 2K restorations served up on Blu-ray by Eureka Entertainment. If you’re a genre fan, then definitely grab this collection up, and thank Eureka for releasing them.