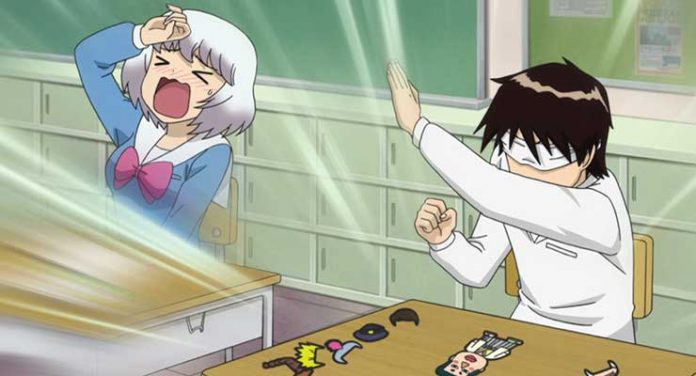 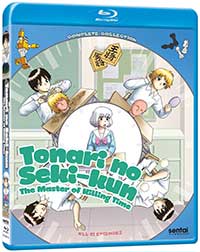 Tonari no Seki-kun, or My Neighbor Seki is based on a Japanese manga series written and illustrated by Morishige Takuma. The comedy series of 21 roughly 8-minute-long episodes follows the high school girl Yokoi Rumi who gets distracted in all of her classes by her class neighbor, the perpetual time-killer Seki Toshinari whose elaborate idling, fiddling, and game playing somehow without ever getting caught, drives Rumi crazy. Yet, even as Rumi is often annoyed and trying her best to concentrate and study in class, she just can’t seem to help herself from getting drawn into Seki’s play, often creating her own elaborate fantasies in own mind about what Seki-kun is doing, like when he starts playing

his own strange version of Shogi (Japanese chess) and Rumi imagines a Princess and a low-born soldier having an affair and being attacked by all the King’s forces because of their forbidden love. The series is actually very funny, although the setup does run a bit thin after a while. It makes sense that each episode is only 8 minutes, because this is not really a series made for binge viewing, like I took it in. In small doses, like one may take in a Sunday comic strip, Tonari is a breath of fresh air and quite entertaining. The animation is also whimsically understated, but just right for the sort of series that we have here. It should also be noted that, most of the dialogue, aside from a few episodes where a couple other characters are brought in to shake things up, the entire series relies on the voice work of the actor voicing Rumi, and for this series, the Japanese Hanazawa Kana does fantastic work. Monica Rial is the English actor and her performance is admirable, but just not on par with Hanazawa’s.

The digital animation of Tonari no Seki-kun looks good in this AVC 1080p encodement from Sentai Filmworks. There isn’t much to complain about at all. The color palette for the series is basic, with subtle, almost pastel tones at times, and they look good, and overall detail and sharpness of the line drawing is excellent.

The original Japanese-language track and an English dub are provided in DTS-HD Master Audio 2.0 stereo.

Both mixes sound equally good, but there is really no comparison in performance between the superior Hanazawa Kana and what seems to be the ubiquitous Monica Rial. This is a series that really relies on the performance of one actor, and Hanazawa nails the high-strung anxiety of Yokoi Rumi in a way that Rial just doesn’t.

Clean opening animations, clean closing animation, and Sentai Filmworks trailers are the only included extras on this 1-disc collection.

For something different that is sure to give you some laughs, Tonari no Seki-kun is the anime series of choice. It isn’t exactly binge-worthy material, but in small doses its quick pace and unlikely scenarios are a fun watch.