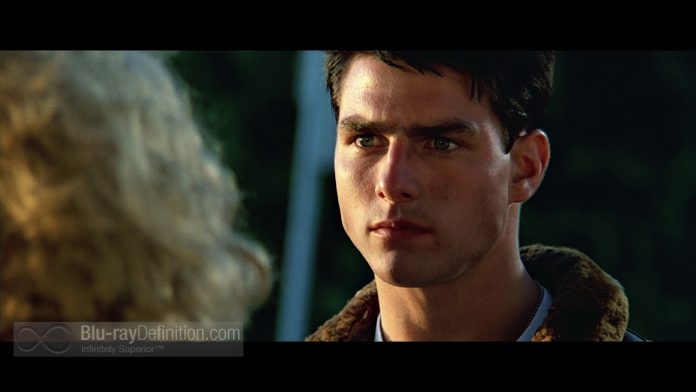 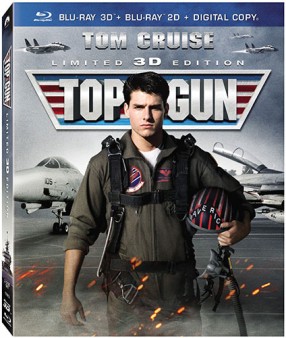 It’s with a heavy heart that I sit down to write this review of Top Gun, having the tragic circumstances of director Tony Scott’s (Unstoppable, Days of Thunder) tragic suicide in the back of my mind. Scott’s work will, nevertheless, live on, and 1986’s Top Gun, will surely be one film he will be remembered for for ages to come. An energetic, high-flying actioner with a syrupy romantic subplot, the film stars a young Tom Cruise and launched the young star into the proverbial stratosphere. Most memorable for its 80’s pop soundtrack including hits by Kenny Loggins and Berlin, its death defying aerial stunts, and perpetual motion and speed so effortlessly portrayed by

the adept behind-the-camera skills of Tony Scott, the film follows the hot shot young “maverick” Naval pilot Pete Mitchell (Cruise) as he makes his way through the Navy’s elite pilot training program in California. A rule breaker with personal demons stemming from his late father, a Navy pilot MIA since 1965, Maverick must battle himself and the other top young pilots to win the Navy’s Top Gun trophy – if he doesn’t wash out, that is. Luckily, the film’s fast pace and testosterone-heavy plot is tempered by the fetching young Kelly McGillis as Charlie, one of Maverick’s flight instructors and the love interest who manages to tame his womanizing ways. A cast of top-flight actors including Tom Skerrit and Michael Ironside complete the lineup for what is a nearly perfect example of 1980s cinematic escapism. Also worthy of note is a young and handsome Val Kilmer’s appearance as Maverick’s number one Top Gun rival, Iceman.

For a film from 1986, Top Gun looks superb even in the plain ol’ “2D,” with excellent contrast, a clean-looking overall image, vivid color reproduction, and relative fine and even grain structure. The new 3D conversion works a lot better than I expected it to as well. There’s very little crosstalk, a good added sense of dimensionality, and , especially during the aerial scenes, a nice bit of “pop-out.” It rarely breaks down into the dreaded “cardboard cut-out” effect. What’s more is, the 3D effect doesn’t damage the sense of detail much as grain is very much still apparent and the image doesn’t look overly smooth or darkened.

DTS-HD Master Audio (48kHz/24-bit) mix, which debuted on the 25th Anniversary release of Top Gun from Paramount, which was previously reviewed here by our very own Lawrence Devoe. If you have a 6.1 or higher system and can take advantage of it, definitely go for the DTS-HD Master Audio 6.1 track, it will be well worth it. It’s an exhilarating experience with its roaring jet engines, energetic ’80s pop soundtrack anchored by the uptempo Kenny Loggins number “Danger Zone” and Berlin’s mid-tempo ballad “Take My Breath Away.” Dialogue is clean and dynamic range is exceptionally wide.

There is in fact nothing new added to this 3D re-release over the recent 25th anniversary Blu-ray release from Paramount. Everything here is identical to what was previously contained on the 2D Blu-ray disc, and the 3D disc has no additional supplements.

Pop the corn, dim the lights, and crank up the home theatre sound system, oh, and throw on those geeky looking 3D glasses too – Top Gun in 3D is an energetic, undeniable pleasure to sit through.