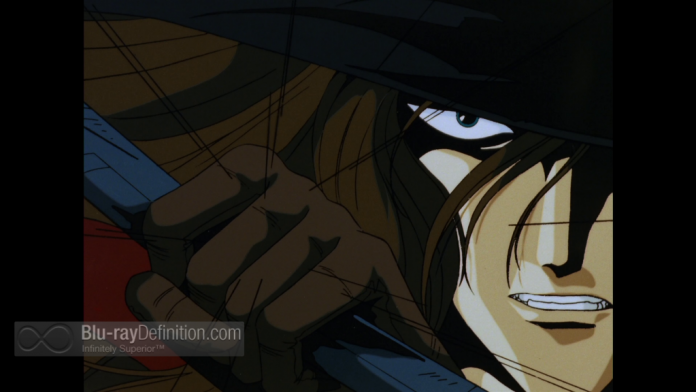 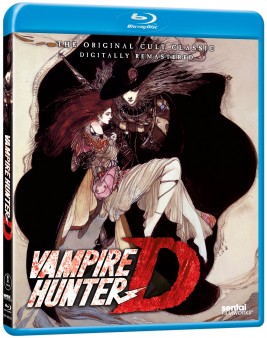 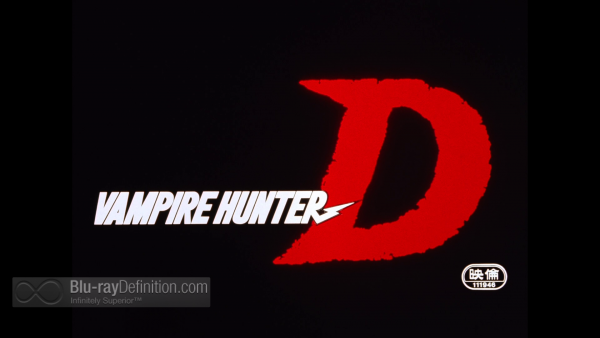 Vampire Hunter D (バンパイアハンターD) is the 1985 feature length film based on the first of a long-running series of light novels by Kikuchi Hideyuki. A Gothic horror/romance/sci-fi thriller, the story is set in the distant future, in the year 12,090 A.D.

The planet is desolate and has been overtaken by technology and mutants. Vampires rule over humanity as Nobles and one young lady, Doris Lang, has had her blood feasted on by one such Noble, the Count Magnus Lee, who intends to make her his next bride. In order to avoid such a fate, Doris seeks out the half-vampire/half-human vampire killer D to help destroy Magnus Lee. As a hybrid, otherwise known as a dhampir, D is hated amongst the pure blooded vampires, but he also has a shocking secret from his past that will stun Magnus, and a left palm that is alive and talks to him. Over the course of his assignment to help Doris, she also falls in love with the dark and dangerous vampire killer, despite his warnings to her that it can never be.

D is a marvelous sort of anti-hero and anime archetype. He might as well have stepped out of a deconstructed western with his grim visage, long cloak and black hat. He’s the pained hero with the dark past destined to save the day, but never allowed to partake in love. Doris, his heroine, could be fleshed out more, but the film doesn’t really revolve around her as much as it does D’s own personal struggle.

This is one of the classic anime films, and for good reason. Not only is the story mature and dark, blending together Gothic horror, romance, action, sci-fi, and a little fan service, but the animation is in a league of its own. There are some scenes reminiscent of some sort of Ralph Bakshi acid trip, while others simply push the boundaries of the pre-CGI format as far as they can go. It’s beautiful, from the character designs to the background artwork that transports you to this dystopian nightmare. 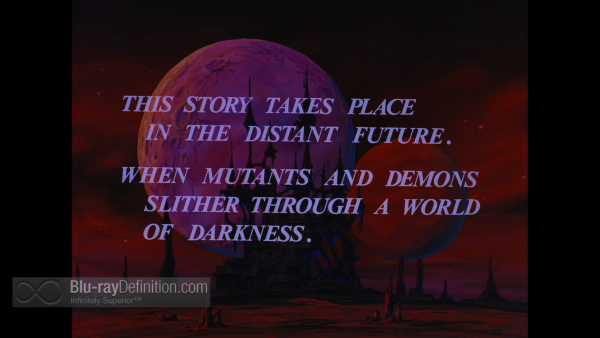 Vampire Hunter D comes to Blu-ray framed at 1.33:1 in an excellent AVC/MPEG-4 1080p encodement from Sentai Filmworks. This new digital remaster doesn’t looks completely clean and sparkling or devoid of any of the original texture and grain of the the film source it was produced on, but given the mid-80s vintage, it looks amazing and authentic. There may be a hint of softening due to DNR, but it is slight, and line art still looks quite crisp. Colors are vibrant, darks looks deep, and there is only a little bit of source damage that creeps in from time to time. 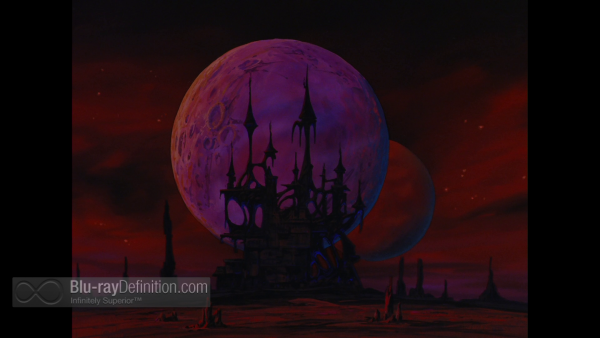 Sentai Filmworks provides Japanese and English dub stereo tracks in DTS-HD Master Audio 2.0 (48kHz/24-bit). While most of the sound effects and dialogue remain in the center, the audio is fantastic nonetheless, mainly owing to the natural dynamics and the wide stereo spread of the atmospheric, classical and new age inspired musical score by Matsuura Noriyoshi. I want to say to stick with the Japanese voice cast also, because the English cast really hams it up beyond belief, detracting from the darkly tinged storyline. That said, I’m sure there are those out there who will be fans of the English track nevertheless, and it sounds just as good as its Japanese counterpart. 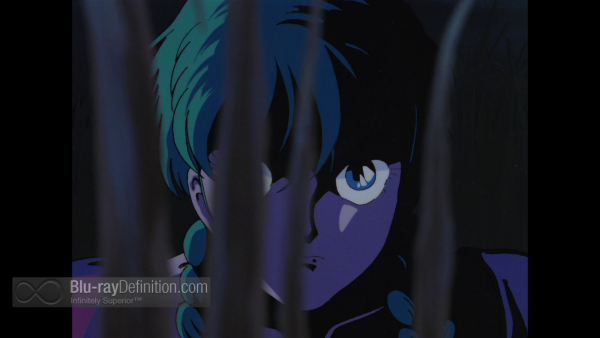 Not much here, but the original trailer is nice to have for those completists out there. 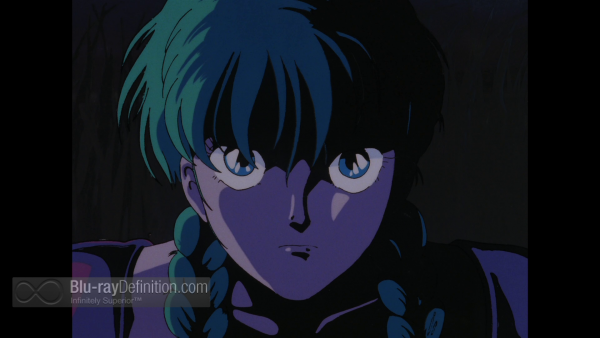 Gloomy, atmospheric, and gorgeous to look at, Vampire Hunter D is one of those classic anime films that helped elevate the status of the genre to the level of a fine art form. It still holds up well today especially in this new remaster on Blu-ray from Sentai Filmworks. 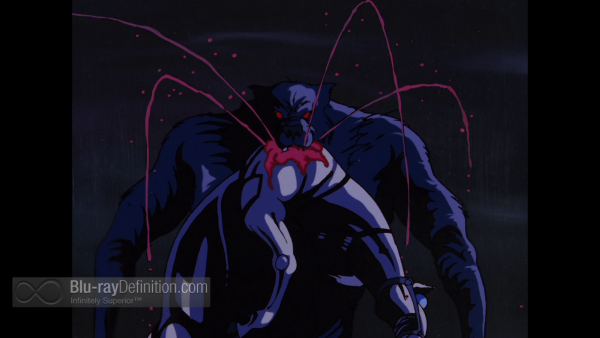 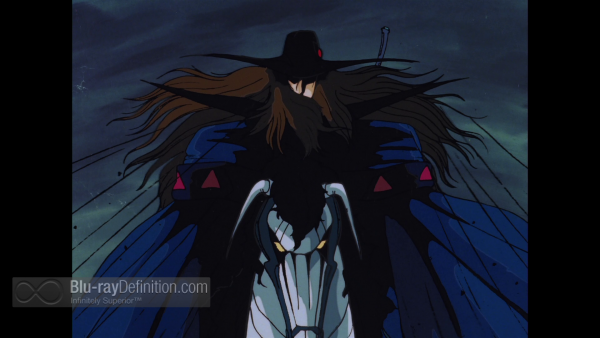 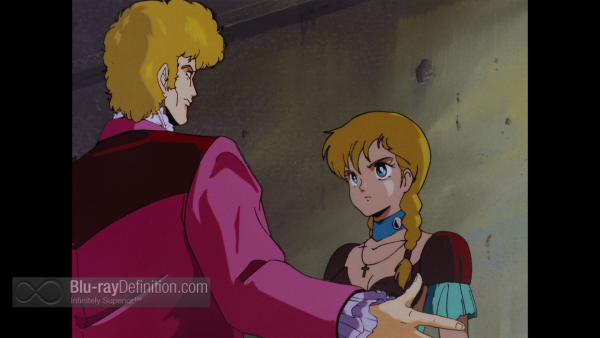 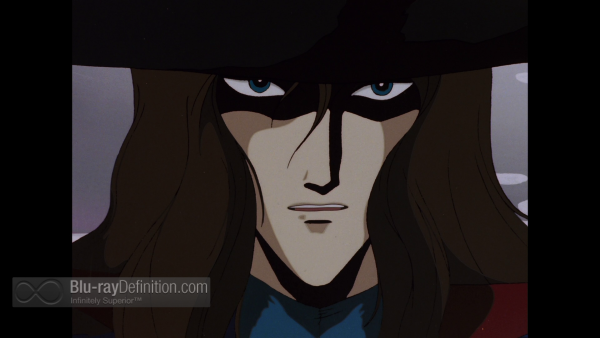 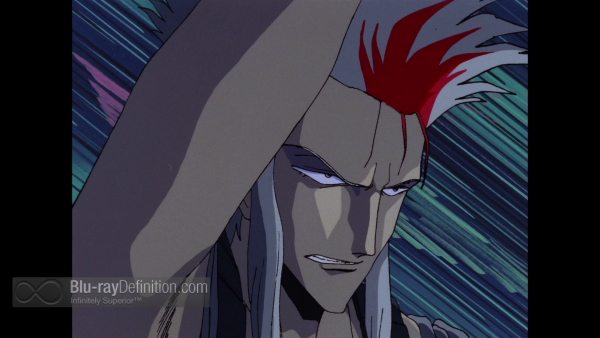 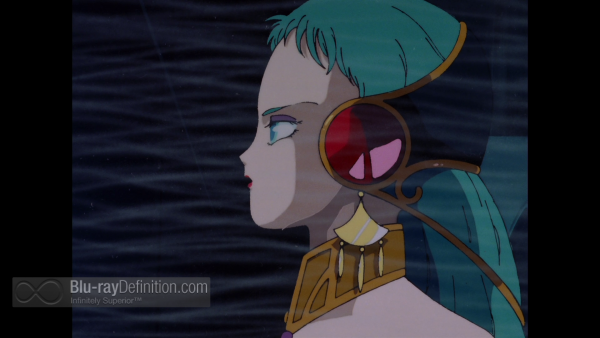 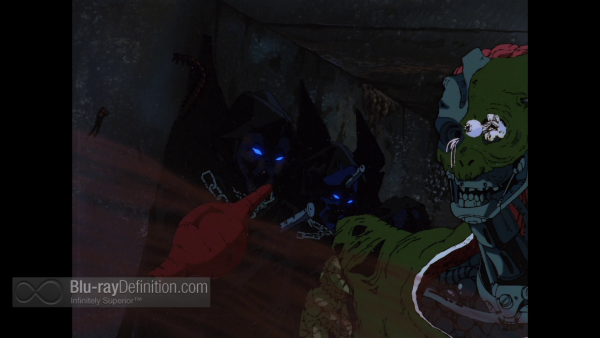 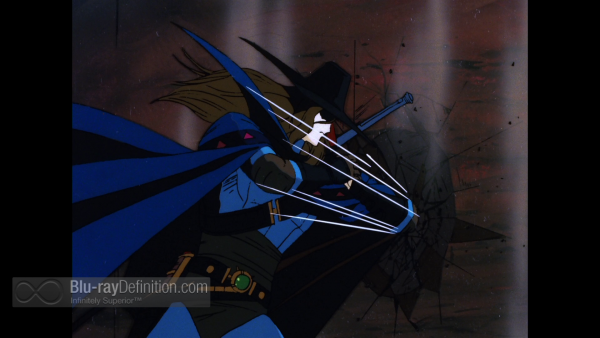 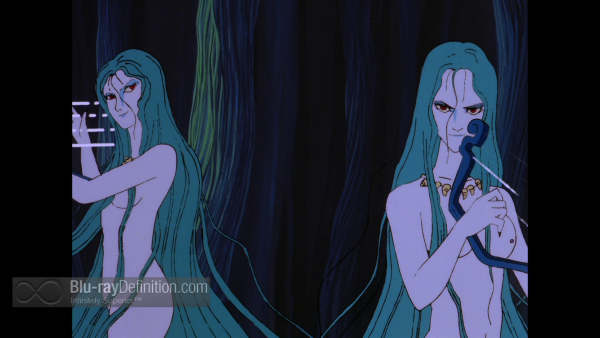 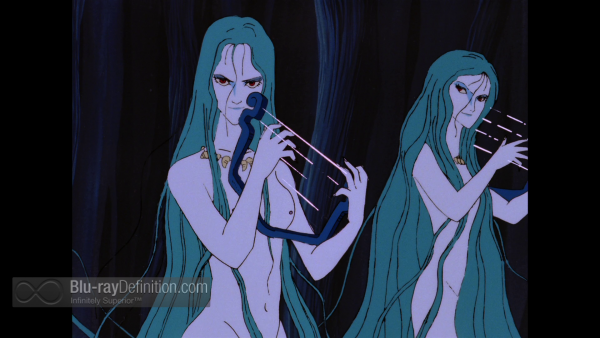 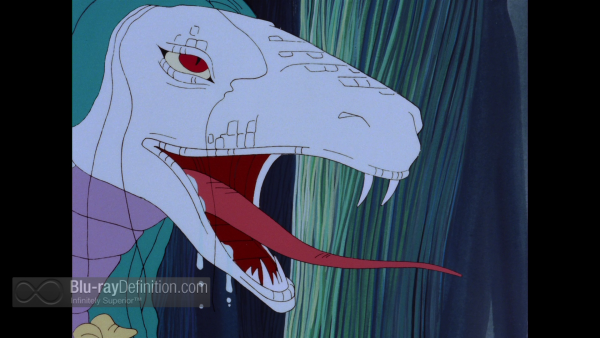 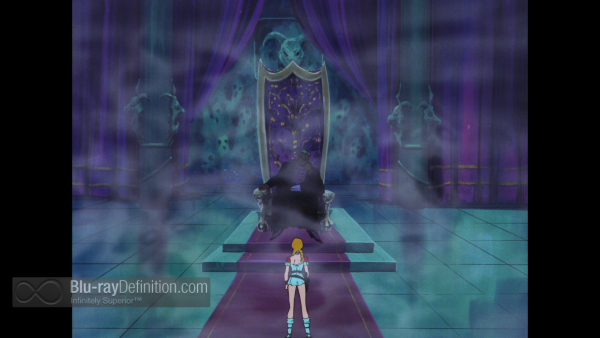 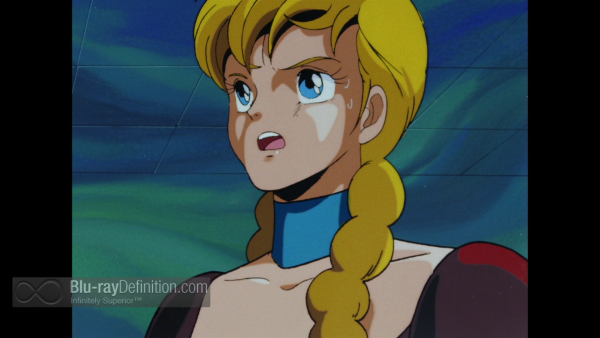 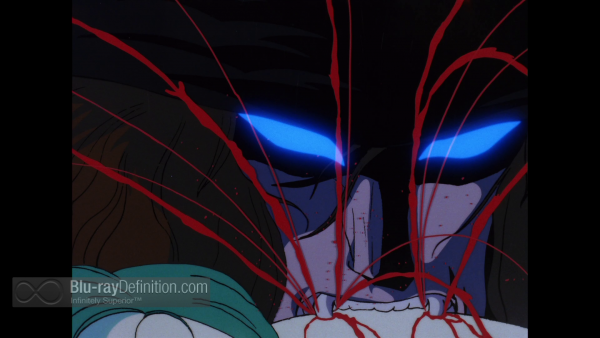 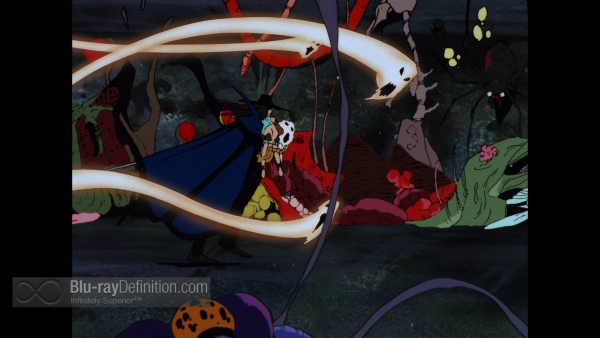 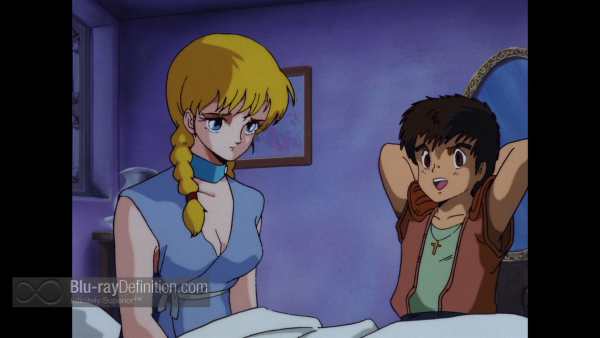 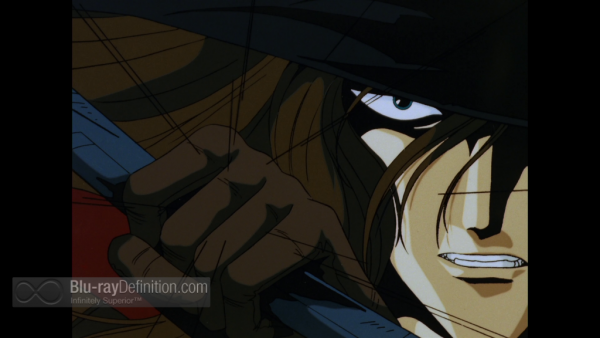 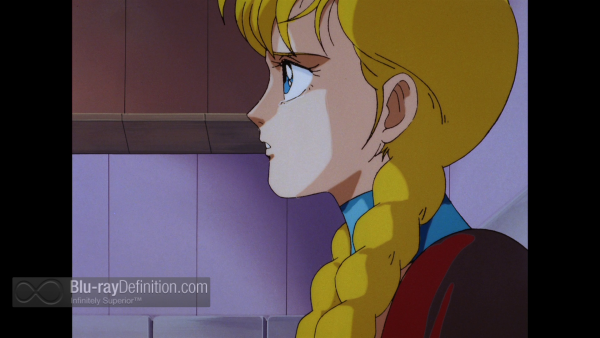 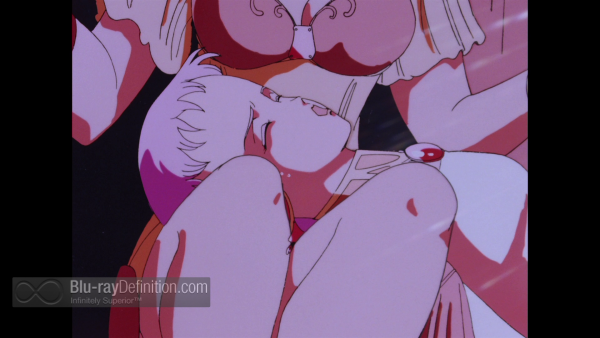 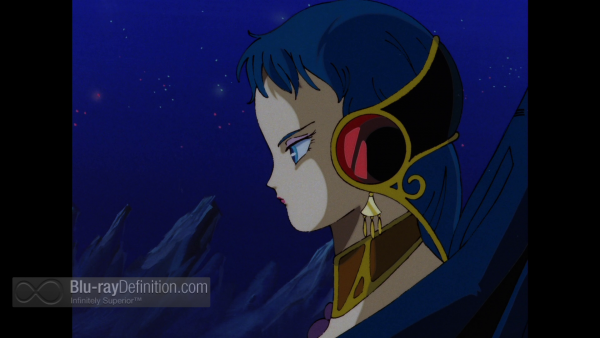