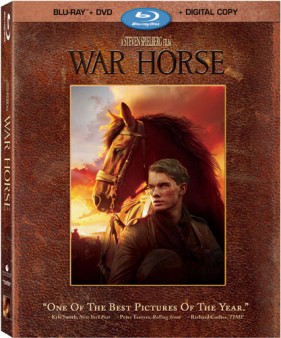 War Horse tells the story based on the Tony award winning Broadway play, the tale of a horse named Joey. Set on the canvas of World War I, the tale shows the friendship between Joey and his young trainer Albert (Jeremy Irvine). When the two are separated due to the pending War, the film follows Joey’s journey home. Along the way, we meet the varying people who impacted his life. Joey only has one goal, to be reunited with Albert, no matter how far he has to travel. The film, basically, shows the emotional attachment we, as humans, have with animals. We may not realize it sometimes, but animals will always hold a special place in our hearts. Spielberg and company, as expected, capture all the emotional range with raw power, pure style and utter excellence that we’ve only come to expect from him.

While War Horse may not be AS impressive (technically) as Spielberg’s other 2011 effort in The Adventures of Tintin, Horse still shows why Spielberg is one of the most consistent directors alive today. Stretching all the way back to his initial films, the man has always been able to capture our attention via his filmmaking. From the legendary Jaws, the stunning, emotionally powerful (and in this viewer’s eyes one of the best films ever made) Schindler’s List, to his more comical Catch Me If You Can, Spielberg just understands audiences. He presents stories that, simply put, connect us. Yes, some can criticize that the film is overly melodramatic at times. That I won’t argue. Any other director I might has knocked a point off the film score; however, Spielberg I just can’t. There’s a reason he’s made some of the best films the world has seen. That reason being that Steven Spielberg is one of the best filmmakers to ever step foot on Earth.

The 2:40:1 framed, AVC MPEG-4 encoded transfer is quite good. Detail is impressive, whether facial close ups that result in accurate flesh tones/contrast levels, or wider, panning shots. Colors showcase fine blacks with deep, inky results all but helping to showcase DP Janusz Kaminski (another of Spielberg’s longtime contributors) keen, visual eye. The film’s print, as one might expect from a newer release, is in fine condition with no instance of artificating, noise, or any other anomalies. During one of the battle sequences, we see all the little intricacies of the film’s transfer. Little bits of dirt, mud, really all the elements of nature and of battle (sweat, blood, tears) round out a fine visual effort from Disney.

The film’s provided DTS-HD Master Audio 7.1 track is perfect. Dialogue is well reproduced, clean, and effective throughout. There’s no instance of dropped dialogue or anything becoming muddled. Atmosphere is, perhaps, one of the best aspects of this Rydstrom mix. Whether it be a quieter sequence, where John Williams score can be heard from the rears giving us a kind of swooping feel to the room, or the more robust, active moments, this mix handles everything well. Discrete effects, like that of gun shots or the hooves of horses hitting the ground, create the sense of us being right in the middle of the action. Pans between rears are also clear and invisible helping to create a truly effective mix. Perhaps, just perhaps this is one of the finest mixes I’ve heard in recent time. Kudos to all involved for creating something I will definitely be using to show off my HT.

The included supplements are presented in HD:

Simply put, War Horse is a tearjerker. While the physical tears may not flow, the pure emotion is present. Disney has put together a Blu-ray with a faithful V/A presentation that captures all of Spielberg’s style. Rounded out with a few solid features, a DVD AND Digital Copy? This one comes Highly Recommended.