Wolf’s Rain is an epic post-apocalyptic anime series that mixes drama, fantasy, and sci-fi into a mature and complex story. Set somewhere in a future world that may or may not be Earth, wolves, thought to have been hunted to extinction some 200 years in the past, still exist by casting a visual illusion over themselves that makes them appear human. With the world mostly desolate and poverty stricken, there is a mythology that a place called Paradise could be found, but only the wolves could lead everyone there. The story of Wolf’s Rain follows four lone wolves, Kiba, an injured lone white wolf, and Tsume, Hige and Toboe who meet each other in a rundown city called Freeze City, all led there by the scent of Lunar Flowers, which are said to lead the way to Paradise. The wolves form a pack and set off to find Paradise and along the way face many dangers and adventures including being hunted by the human nobility, and coming across the legendary Flower Maiden – a genetically modified Lunar Flower grown into the form of a beautiful girl who is said to be the key to Paradise.

The series is engaging in its serious treatment of the search for paradise as an almost religious allegory on humanity’s quest to return to the Garden of Eden. The characters, wolf, human, and flower alike, are all thoroughly fleshed out and there’s a pervasive melancholy to the series that keeps it mature. It’s in the score from Kanno Yoko and even the dialogue that seems fascinated with mortality. Visually, it is a breathtakingly animated series as well. The wolves look almost real and the visual effect used to show the cloak they use to conceal themselves works to blur the lines even further between human and beast. With Wolf’s Rain, a 2003 series, BONES, proved themselves again an anime studio that was unlike the rest and could make some serious and often thought-provoking works. 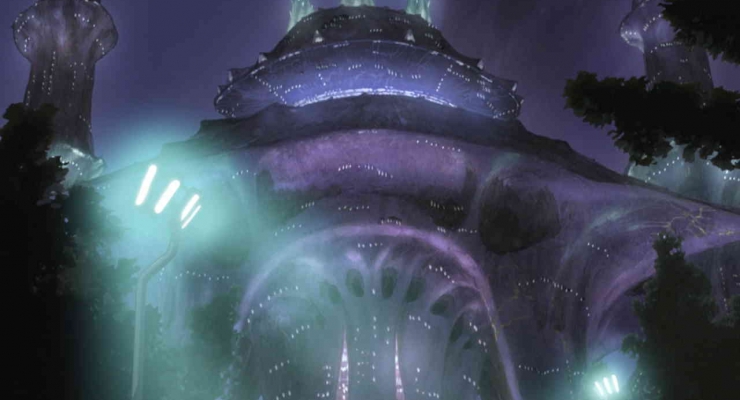 Being an older series done in standard definition, Wolf’s Rain doesn’t look as great as an HD-sourced series. It’s a bit soft, there is some haloing around the line art and colors are a bit subdued. That said, the expanded bandwidth and better compression formats on Blu-ray do give it a small edge over the DVD versions. It is brought to Blu-ray in an AVC 1080p upscaled encodement framed at its original 1.33:1.

The original Japanese stereo mix is included in Dolby TrueHD 2.0 and an English dub in Dolby TrueHD 5.1. The 5.1 mix doesn’t bring much to the table other than a lot of ambience and some boosted low-end in the LFE. The 2.0 mix in Japanese sounds more balanced, but is not spectacular by any means. It is a basic stereo mix, but the incredibly emotive musical score for this series does come through very well as does the dialogue.

I’m glad to see the Japanese cast and staff interviews included in this set, but much included here are SD port-overs.

The video quality of Wolf’s Rain is necessarily not up to today’s standards given its 2003 vintage, but this is truly a classic series that many other series in the genre today struggle to match. If you’re an anime fan, you need to watch this one and own this collection.

3.4 / 5 TheaterByte Rating
{{ reviewsOverall }} / 5 User Rating (0 votes)
TV-14TV Rating
BONESAnimation Studio
Funimation EntertainmentDistributor
Okamura TensaiDirector
Nobumoto KeikoWriter
750 Mins.Run Time
7 Feb. 2017Release Date
$64.98MSRP
1.33:1Aspect Ratio
AVC 1080pVideo
Japanese Dolby TrueHD 2.0 StereoAudio
English Dolby TrueHD 5.1Secondary Audio
EnglishSubtitles
The Story
The Animation
The Video
The Audio
The Dub
The Supplements
Summary
This classic anime series from 2003 reemerges on Blu-ray and proves just as riveting, mature, and complex as it did over a decade ago. The picture and sound may not match today's productions, but this release is well worth it for anime fans.
What people say... Login to rate
Order by: