Yona of the Dawn: Part One (TheaterByte Blu-ray Review) 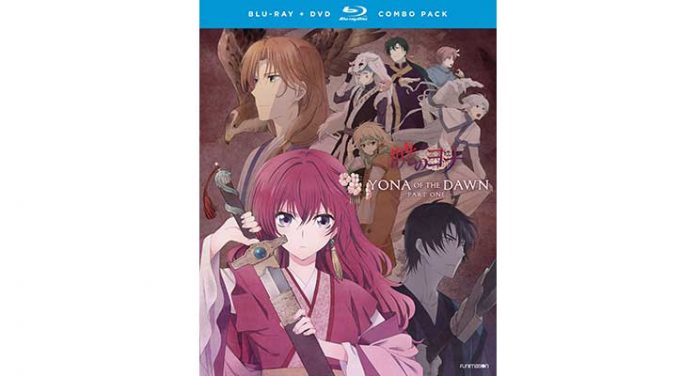 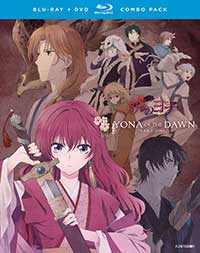 Yona of the Dawn is a fantasy adventure series based on the manga series by Kusanagi Mizuho. It’s central character is the female teenager Princess Yona, a flame-haired beauty who begins the series living a sheltered life of luxury in a palace under the watchful but loving eye of her father King Il of the kingdom of Kouka and under the protection of her bodyguard Son Hak. The catalyst that shakes up the story is when Yona’s childhood friend and crush Su-won arrives at the palace on her sixteenth birthday to pay her tribute, but later that night reveals himself as a traitor, killing King Il and attempting to kill Yona. Son Hak must come to her rescue and fight off Soo-won’s men. The two then flee together, beginning a life on the run. They run to Son Hak’s gradfather Sun Mundok, who shelters them for a while, then suggests to them they seek out the wise oracle Ik-su who has lived in isolation. When they find Ik-su, a bumbling man with a kind demeanor, and his assistant, the young bishounen Yun, Ik-su tells them a tale of the ancient times when dragons ruled the kingdoms. He offers that Yona and Son Hak, in order to reunite the now warring kingdoms, must find those who have the dragon’s blood in them and unite them to battle against Sun-won. So, with the young Yun, the three set off to find those with the dragons’ blood.

Part one of Yona of the Dawn is an excellent fantasy adventure, although it ends very open-ended, which is to be expected considering it has been split up. Yona herself is a compelling character, a young, sheltered girl, somewhat naïve who dreams of puppy love and then is confronted with the harsh realities of loss and betrayal instantly having to grow up, toughen up, and become a fighter and a leader. She’s not only a strong feminist character, but a very likable person altogether, and the writing for the series makes sure that none of the characters, including Yona, are overbearing.

There’s an easy mixture of action, thrills, and comedy in these first 12 episodes, with not too much of a reliance on the usual anime archetypes to avoid the need for strong storytelling. Son Hak is perhaps the closest they come to offering up a typical, larger-than-life “superman” of sorts whose battle prowess is legendary, but then they temper him with some romantic elements.

On the whole, we get some artfully crafted animation that pays close attention to detail in what is a period setting with elements of magic and fantasy that don’t seem too anachronistic, a wonderful use of color, and of course excellent action sequences. The action heats up even more in Part Two, but that’s for another review.

Yona of the Dawn looks really good in this AVC 1080p encodement from Funimation. The colors sparkle and the contrast and brightness are excellent. Color banding is only mild and there aren’t any issues with stair stepping around the line art.

I was again disappointed in the audio quality Funimation presented on Yona of the Dawn. The original Japanese-language track is included in Dolby TrueHD 2.0 and the English dub in Dolby TrueHD 5.1. Like many of the Funimation releases, the audio levels are low, the dynamic range limited, and audio syncing is an issue – the sync wavers and I have to quite often pause and go back a few frames to get this to lock back in. I don’t know why this happens with Funimation titles, but it ONLY happens with Funimation’s titles. I have tried using the lip sync feature on my AVR, but then it throws everything else off, and, the sync on the Funimation discs, as I said, wavers. Even with the sync feature engaged, it will drift out again. It’s useless and it’s frustrating. It gets even worse when there are live action special features. My goodness. Anyway, the Japanese voice cast is stellar anyway. I could tell when I wasn’t fussing with the remote trying to get the animated lips to line up with the audio. The English cast not so much.

The two audio commentaries beef up what are the usual array of promos and clean animations.

Yona of the Dawn hits a home run out of the box with part one of what is a beautifully animated series filled with intriguing characters. Although these first 12 episodes end on a proverbial question mark, this is an excellent set that looks great and will have you hooked. The biggest flaw in this release from Funimation is the frustrating audio.