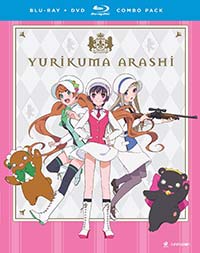 Yurikuma Arashi (ユリ熊嵐) is a Japanese yuri anime series produced by Silver Link and directed by Ikuhara Kunihiko. Anyone unfamiliar with this series or its manga will be taken aback by the sheer strangeness of this series right from the start. In fact, Yurikuma is so weird and surreal it will most likely be difficult for it to find much of an audience outside of the most dedicated yuri fans and of course otaku.

In the peculiar alternate universe where Yurikuma Arashi takes place, humans have constructed a great “Wall of Severance” in order to separate themselves from the bears who have grown violent after a distant planet blew up and sprayed the Earth with a meteor shower. The bears now want to eat humans, but as we eventually learn, they are also drawn to them, maybe in love with them in some ways too. Two bears, Yurishiro Ginko and Yurigasaki Lulu, sneak through the Wall of Severance and disguise themselves as humans, eventually enrolling in the all-girl school Arashigaoka Academy. There, they get close to second year student Tsubaki Kureha who hates bears, not only because when she was younger one of them ate her mother, but because only recently her best friend, Sumika, whom she was in love with, was recently killed by a bear as well. Kureha begins to get close to Ginko not knowing Ginko is a bear and it will soon be revealed that the two have a past together, but can their friendship and growing love overcome their major differences.

Yurikuma Arashi is strange indeed, mixing some sort of sci-fi subplot about multiple dimensions and metamorphosis into a tale of “skinwalkers” falling in love with humans and vice versa. The story progresses often in a space between the real world and dreamlike vignettes. Aiding this quirky bestial Sapphic romance along is at times striking artwork that takes Loli-Goth to a whole new level, with very detailed backgrounds at times reminiscent of renaissance paintings, other times of the more surreal, almost disjointed works of Salvador DalÍ. The character designs are also quite beautiful in their own way, though they do convey a certain grim overtone at times.

The AVC 1080p encodement of Yurikuma Arashi on Blu-ray from FUNimation looks really good. The colors really pop nicely and there are no major issues with stairstepping or noise. There are some brief instances of banding that can be overlooked and most non-videophiles won’t take exception to it.

FUNimation gives us the original Japanese audio track in Dolby TrueHD 2.0 stereo and an English dub in Dolby TrueHD 5.1. Almost true to form as this point for FUNimation releases, the audio quality is average at best for Yurikuma Arashi, with wavering lip sync issues and mastering levels that are so way below the norm that I raised my listening levels by about 8db above where they normally are. The 5.1 mix is nothing too special, with mild atmospherics and the occasional discrete sound escaping into the surround channels. Dynamics are nearly non-existent, which has more to do with the low levels and just lack of headroom than the typical loud mastering issues that push everything to the front thereby limiting range. I haven’t even gotten to the part where the English cast isn’t even worth listening to yet. Oh, yeah, don’t watch this series in English.

The two audio commentaries are welcome inclusions. Everything else is the usual fare, although they do allow more looks at the series’ animation.

Yurikuma Arashi is not your typical yuri series and that is both its strength and its weakness. While this weird and surreal story will probably appeal to some looking for something different and a little more artistic, it is also likely to perplex and alienate others. The Blu-ray/DVD combo set from FUNimation, on the other hand is good, apart from the not-so-great audio tracks.