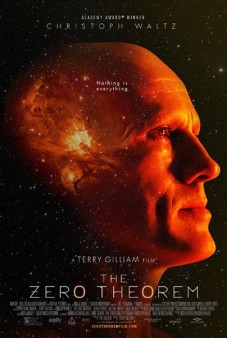 The Zero Theorem is a film where, after I walked out, I asked myself “what have I just seen?” The answer to that was “I have no idea.”

I expected The Zero Theorem to be a film right out of left field, just like Director Terry Gilliam’s previous films The Imaginarium of Doctor Parnassus, The Brothers Grimm or Brazil. But The Zero Theorem is not even in the same ball park, it is clearly in a different realm, and it makes no sense at all. What should’ve tipped me off as to how bad it was going to be was when there were only 5 people at the press screening I went to. And the reaction from them at the end of the movie was not a very good one. 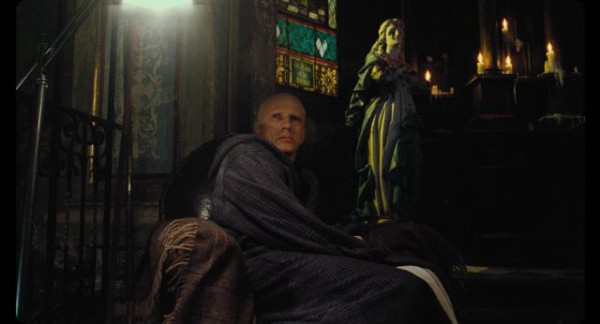 After leaving the film I was really confused about the plot, and then I read an article in a magazine about the film’s plot that kind of but not really cleared it up for me: Qohen Leth (a shaven-headed Christoph Waltz) works for a company called Mancom (it sounds to me like a gay dating sight, but it is not). There are very little clues as to what he does for the company or what kind of business the company is in, but Leth’s job is to work on a project to prove that everything equals nothing (huh?). In other words, to determine if life has any meaning (how is this achievable?).

Leth works from home, which used to be a church, but is now a burned-out wreck (it used to house priests who happened to have taken a vow of silence and therefore did not tell each other that their church was on fire), so Leth lives in a charred, dirty, rat infested place. To put it midly, it’s disgusting. He even, at times, sits in front of his computer naked, while it keeps screaming at him “next installment is due in one hour, one must equal 100%”. So he just can’t seem to make his installment equal 100%. Are you still confused? I was too. To make matters even more confusing, Matt Damon (looking like a much thiner Philip Seymour Hoffman) is The Boss of Mancom who happens to wear clothing that matches his surroundings (chair, curtains) – quite odd. The boss (called Management in the film) sends his teenage son around to Leth’s home to either 1.) do some spying on him or 2.) to help him with his job as the son is, as you would expect, a computer whizz, or 3) to try to annoy him. Perhaps all three, though this is not made clear in the film. Leth is also visited by a very seductive woman (unknown Melanie Thierry) who gives him a disc to insert into his computer, and when he does, it takes him (to meet her in virtual worlds) at a very romantic and beautiful island. Perhaps this is to escape his boring life. He’s also been assigned a shrink from work – Dr. Shrink-Rom (Tilda Swinton) who speaks to him through his computer. Some other characters come and go but it is not clear what their purposes are. 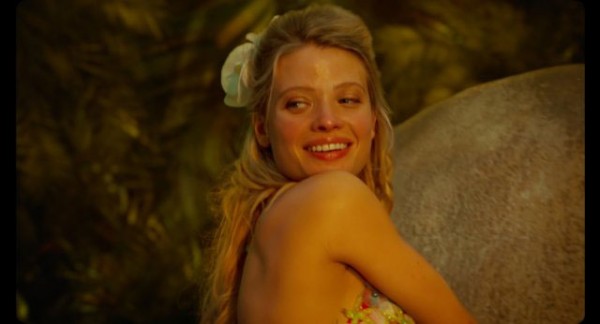 Once in a while Leth ventures out of his house to a world that looks like London in 100 years, with visual adverts that follow him as he walks along the sidewalk, and a skyline that looks futuristic, even including what looks to be the Shard under construction (though it was filmed in Bucharest as Gilliam prefers to shoot in that country because it is cheap for him to do so).

I find it unbelievable that 2 time Oscar-winning actor Waltz would sign up to play a part so confusing, mad, stupid, and incomprehensible, and even to allow himself to be shown in various states of undress, with a huge belly! The Zero Theorem cost over $13 million to make; sure the sets look amazing and the special effects are good, but you’d think they could have used some of that money to write a better script and to hire a director who would make a movie that would be interesting and intellectual. What Gilliam & Co. have made is one big mess.