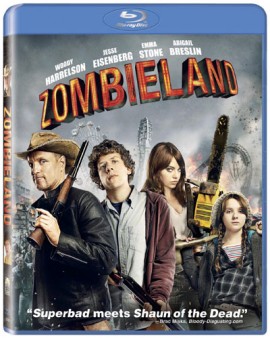 High-Resolution 1920X180p Screen Captures are pending for this review

If you’re going to live in a country overrun with zombies, you have to have a sense of humor. And so, from its very first moment, Zombieland sets its tone as an irreverent comedy, following a handful of healthy human survivors as they make friends and enemies while looking for a safe place to call home, or at least stay alive for one more day.

We learn that the virus which caused the horrific human mutation all began with an infected hamburger, and spread by bites and bodily fluids to overtake the population in a matter of only two months. People are now named simply for their hometowns, and so young loner Columbus (Jesse Eisneberg), who abides by a strict set of rules which have kept him alive thus far, joins forces with ass-kicking Tallahassee (Woody Harrelson) and eventually sisters Wichita and Little Rock (Emma Stone and Abigail Breslin) on a long, empty road to nowhere.

Of course, getting there is half the fun, and the personal agendas, pit stops and detours make for lots of adrenaline-fueled, guns-blazing thrills and big old belly laughs too. One sequence in Los Angeles is so bizarre I won’t even attempt to consolidate it, or spoil the movie’s biggest, best surprise, but suffice it to say that the makers of Zombieland spared no expense to entertain movie lovers.

The 2.40:1 image of Zombieland is a clean 1080p AVC-encoded gem from Sony with minimal noise and compression artifacting, even in the usual trouble spots such as shadows or out-of-focus areas of the frame. The movie was shot on HD video, as evidenced by the slight streaking in fast movement, but in general the picture is quite filmic, with ample fine detail. The comedic style calls for frequent sight gags, achieved through digital enhancement, and these are blended seamlessly, even on a big, sharp screen.

The soundtrack to Zombieland is an in-our-faces DTS-HD Master Audio 5.1 brimming with strong bass and frequent sonic jolts that are best enjoyed loud. Discrete surrounds are employed for an off-camera voice or a simple cue like a gunshot. Voices and music can be placed in the rears to engrossing effect. Larger environments such as an amusement park or smaller; like the claustrophobic confines of a working haunted house; are fleshed out with a clean, effortless quality.

This being a popular new release (the highest-grossing zombie movie ever, we’re told), Sony has been quite generous with the extras. All of the video supplements for Zombieland are presented in high definition. These include:

Zombieland strikes a perfect balance between laughs and scares, captured in a great-looking, bold-sounding Blu-ray package that flaunts many fine next-generation features. If you’re a fan of the evolving modern horror genre, this one’s a no-brainer. (Mmm, brains….)