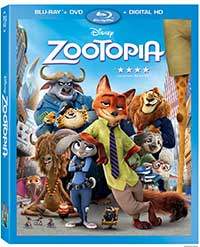 Set in a big city where anthropomorphic animals have evolved past the differences that once dived the predators and prey, the animals now live together in a supposedly more enlightened age, but still separated by their histories of prejudice. Spunky small town bunny Judy Hopps (Ginnifer Goodwin, TV’s Once Upon a Time) is determined not to let that get in her way, however. She’s going to leave her parents’ (Bonnie Hunt and Stu Lake) carrot farm and set out for the big city of Zootopia to become the first bunny to ever become a cop. She makes it through the police-training academy and thanks to the lion Mayor Lionsheart’s (J.K. Simmons) initiative of species integration, she becomes a cop, but things aren’t as rosy as she thought they would be. Her superior, water buffalo Chief Bogo (Idris Elba, Finding Dory, Bastille Day) assigns her to be a meter maid. Still, the spunky rabbit doesn’t let that stop her from trying to make a difference, and she ends up

meeting a wily con artist fox named Nick Wilde (Jason Bateman) who was posing as a downtrodden father trying to get his son an elephant popsicle, but was really melting them down to resell to the myriad lemming bankers at Lemming Bros. Judy is on to Nick and ready to bust him, but the two end up stumbling onto a major conspiracy when the predators in Zootopia start reverting to their wild state again. Judy and Nick must work together to uncover the perpetrators causing this to happen even as they must resolve the doubts and prejudices they have about each other.

One on level, Zootopia is a film that teaches kids and adults alike to always be true to one’s self and to work hard to accomplish one’s dreams to gain success, and that is an excellent message for anyone to learn. But another very strong thread in the film is one of shaking off racism, prejudice, and bigotry to live together in harmony with your neighbors. The film never shows this to be an easy task, after all, it was “once upon a time” that most of the animals lived in fear of the predators, as the film tells us as it begins. We can guess that it has been centuries, maybe millennia past now and even amongst the non-predator class, there are signs that things aren’t so harmonious. There’s never been a rabbit as a police officer, because rabbits are supposed to be “dumb” and timid.

The fact that the task is taken on in the candy colored, cute world of bunnies and little lambs somehow makes it even more poignant and subversive than any film set in our real world ever could be. In Zootopia, the herbivores, or the prey, make up 90% of the population, yet it is the predators in control of the city, such as the mayor, who is a lion, or the wolves who make up the majority of the police force, and the polar bears who are the strong-arm for the underground crime boss. And the stereotypes the animals all hold for one another abound. Nick is not to be trusted, and he is insulted by how everyone treats him as a criminal on sight. Judy is “cute” but, as she says, only a bunny can say that to another bunny. If you’re not a bunny just don’t do it. She then proceeds to ignorantly praise Nick on how articulate he is and, finally, when she has the chance to calm the fears of the populace about the outbreak of predators going wild, she hints it could just be something in their genetic makeup. It strikes Nick as unreasonable, an insult to his very nature, but something that never crossed Judy’s well-meaning mind as being insulting.

Although Zootopia hits on all of this, it manages to maintain its charm, whimsy, and lighthearted atmosphere. It’s a fun, action-packed adventure film that the family will love and the cast of celebrities, which also includes a cameo voice acting and musical performance by Shakira, is outstanding.

Zootopia looks fabulous in this AVC 1080p encodement to Blu-ray from Disney. The studio only sent us the 2D Blu-ray combo pack (the film is also available in a 3D combo pack), but this 2.39:1 framed 2D version of the digital 3DCG production looks amazing too. The colors are dazzling, the detail is impeccable, one can see each strand of fur clearly on these endearing animals, and no issues with color banding or aliasing are present to hinder enjoyment.

The English DTS-HD Master Audio 7.1 audio mix is equally enjoyable. While it is an aggressive mix with plenty

of solid, discrete sound effects mixed around the room, it is not overwhelming and consistently loud or “in-your-face” so to speak. There are plenty of dynamics and excellent balance, relaxed highs and deep without being boomy lows. The dialogue is clear and natural as well. This is a reference of sound engineering.

The set is packed with a collection of fine is mostly brief featurettes that go over the production of the film and includes some deleted scenes and characters. See below for details.

Walt Disney’s last animated film that was this good on so many levels was Pixar’s Inside Out. I can’t recall the last one from Walt Disney Animation Studios that hit on every cylinder like Zootopia, but regardless, this one is an instant classic.