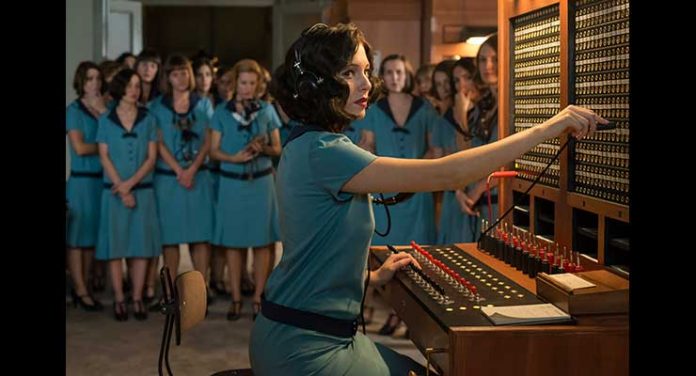 Long before there were the “cable guys,” there were the “cable girls” (Las Chicas del Cable) who “manned” the lines of the only telecommunication company in 1928 Madrid. This eight-episode Netflix Original series picks up the stories of four young women seeking independence and better lives in a society professionally and domestically dominated by men. “Working girl” Alba Romero (Blanca Suarez) gets into serious trouble with the law and to avoid prison, she agrees to rob the Metropolitan Telephone Exchange for the crooked Inspector Beltran (Carlos Kaniowski) who eventually becomes her nemesis.

The resourceful Alba assumes the identity “Lidia Aguilar,” flirts with the company owner’s lackadaisical son Carlos Cifuentes (Martino Rivas), and cheats her way into a telephone operator (telefonista) position. She befriends three other telefonistas:  Angeles (Maggie Civantos) a married mother who loves her job, Carlota (Ana Fernandez) repressed by her domineering father Colonel Emilio Rodriguez (Joan Crosas), and Marga (Nadia de Santiago) a shy country girl. When Alba meets the company director and owner’s son-in-law, Francisco Gomez (Yon Gonzalez), he recalls their romantic relationship ten years earlier. The past refuses to go away quietly as Francisco cannot seem to give up Alba in spite of the best advice from Madame Victoria (Kiti Manver) who had instructed the young woman in the “tricks” of the “trade.” He does eventually give her enough money to temporarily get Beltran off her case. 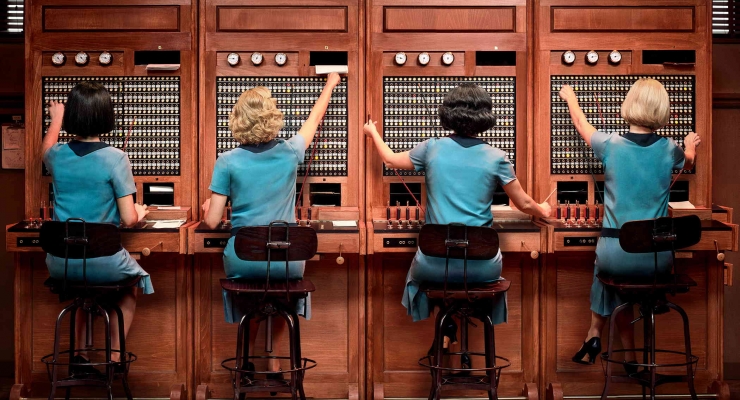 The other telefonistas have their own issues.  Angeles’s abusive husband, telephone technician Mario (Sergio Mur), wants her to stay home and take care of their daughter while he sexes it up with Carolina (Iria de Rio) Francisco’s secretary. Carlota’s father evicts her after she gets drunk at a company party with her boyfriend, the skilled engineer Miguel Pascual (Borja Luna). Marga is being annoyed by the timid advances of company accountant Pablo Santos (Nico Romero). Alba, Carlota and Marga  get rooms at Doña Lola’s (Tina Sainz) boardinghouse. When Carlos chooses Alba to handle the first trans-Atlantic phone call between President Coolidge and King Alfonso (Miguel Labo), she botches the assignment and Angeles saves the day.

Telefonista supervisor Sara Millan (Ana Polvorosa) and Carlota meet at a feminist rally and a romance between the two women begins much to the discomfiture of Miguel. Carolina raids Alba’s room and, finding an old love note from Francisco, tells his wife, Elisa (Angela Cremonte) that Alba is her husband’s lover.

With Carlos’s encouragement and funding, Miguel is working to develop a rotary dial telephone that will revolutionize the communications industry and make the telefonistas obsolete. Company founder Don Ricardo Cifuentes wants to put the brakes on this sub rosa project because it would prevent his being able to eavesdrop on private conversations and obtain the valuable insider information that has made the family quite wealthy. Drama abounds and the continued adventures, misadventures, and romantic entanglements of the four telephonistas mount as the storm clouds of a possible military coup begin to gather.

With its high production values and evocative on-location shots of old Madrid, Cable Girls gets the sets and costumes of the “flapper” era just right. The incongruity here is the pervasive and clearly present-era musical numbers in the soundtrack. While this series gets launched by the personal lives of the cable girls, it also includes a dramatic family saga,  a social history of the budding feminists  and the male chauvinists that try that try to keep the women a few steps behind. There is an eight-episode season for next year that will continue to deal with the complex interpersonal relationships that have developed during Season One.

Cable Girls is  available now for streaming on Netflix.