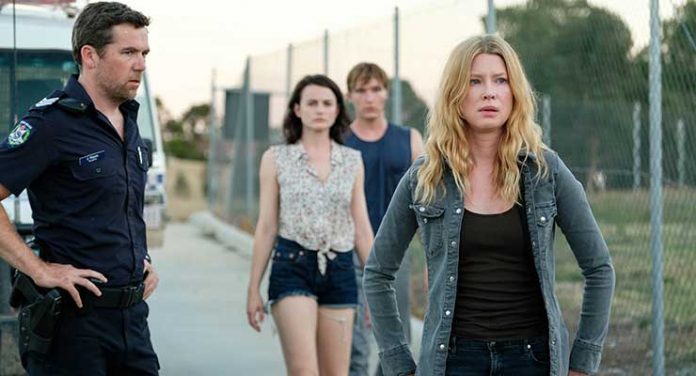 A literal slam-bang finish to the first season of Glitch found Constable James Hayes (Patrick Brammall) doing in his risen-from-the-dead colleague Vic Eastley (Andrew McFarlane) who posed a threat to “The Risen,” seven deceased locals who had suddenly emerged from their graves in the Yoorana Cemetery during Episode 1. Not to be outdone, Glitch Season 2 opens with the late Dr. Elishia McKellar (Genevieve O’Reilly) extricating herself from a morgue drawer and leaving the hospital clad only in a hospital gown. Hayes now visits the same hospital to see his wife Sarah (Emily Barclay) who nearly died during the birth of their daughter.

Hayes secretly protects The Risen including his late wife Kate (Emma Booth), who is currently living in a remote farmhouse with World War I veteran Charlie Thompson (Sean Keenan), and young skateboarder Kristie (Hannah Monson). “John Doe” (Rodger Corser), another of the reanimated, encounters Professor Nicola Heysen (Pernilla August) from Noregard Pharmaceuticals (the company name itself gives all sorts of hints about the ethics of the research that Dr. McKellar was carrying out). Dr. Heysen tells John that he is really William Blackburn, a convicted thief and murderer, and cruelly tests his ability to regenerate the fingers of his right hand that she has just amputated.

Paddy Fitzgerald (Ned Dennehy), the first mayor of Yoorana, another member of The Risen, is trying to go through legal channels to prove that his family mansion was not legitimately passed on after his murder. Paddy recruits Beau Cooper (Aaron McGrath), his great-great grandson to help him straighten up the ancestral home at Corona Hill.

The living dead all have major gaps in their respective memories that are just starting to get filled in, particularly those involving the details of their deaths. There are also shrinking invisible boundary lines that the Risen cannot cross without disintegrating. Constable Hayes finally confides in his partner Chris Rennox (John Leary) about the existence of The Risen, and Dr. McKellar now becomes a “person of interest.” 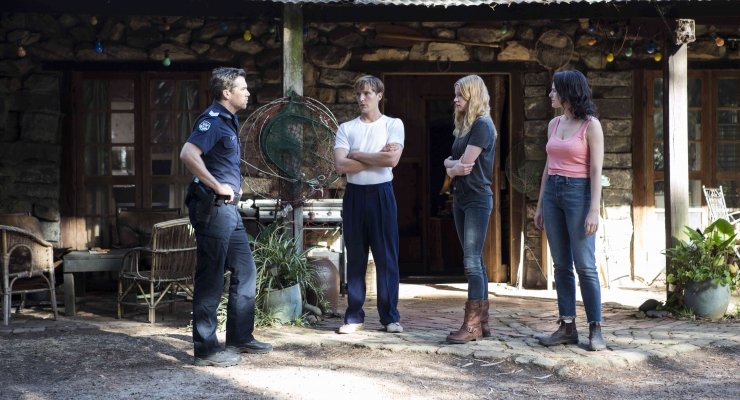 A new character in Glitch Season 2, Phil Holden (Rob Collins), has apparently survived an oil rig disaster and moved back in  with stepson Beau Cooper and wife Kath McCray (Lisa Flanagan) who coincidentally works at the Noregard plant. Phil uncovers the corpse of constable Vic Eastley that quickly disintegrates and then goes on a mission to eliminate the remaining Risen, beginning with Dr. McKellar. In an unusual turn of events, Sarah Hayes joins forces with Phil to assist in the permanent removal of the resurrected folk sequestered in Dr. Heysen’s Noregard facility. In a last-ditch effort to bring back Elishia and extend the safe boundary for the Risen, Dr. Heysen and William attempt to recreate the hocus-pocus elements of reanimation, beginning with the harmonic activation of salt crystals to form a visual pattern that may hold the key to eternal life.

Seeing Season 1 is essential if you wish to pick up the pieces of this sequel since significant suspension of disbelief is required. Once done, Glitch Season 2 becomes just as fascinating a watch as its predecessor. This show departs from the usual “return of the dead” formula in shows such as Resurrection or The Returned, and provides incremental and dimensional development of the returnees’ characters as they recover their memories. Superb directors Emma Freeman and Tony Krawitz keep the tension mounting throughout the six episodes and the 4K cameras parlay the striking Australian landscape into the bargain. Still, not everything is neatly packaged up as Season 2 concludes so the door remains open for a Season 3. I certainly hope so. Glitch offers a thought-provoking glimpse of what the “afterlife” might be for those who have untimely passed through the portals of death. As quoted at the end of Episode 6 from Thornton Wilder’s The Bridge of San Luis Rey, “There is a land of the living and a land of the dead and the bridge is love, the only survival, the only meaning.”

Glitch Season 2 is now streaming in its entirety on Netflix.