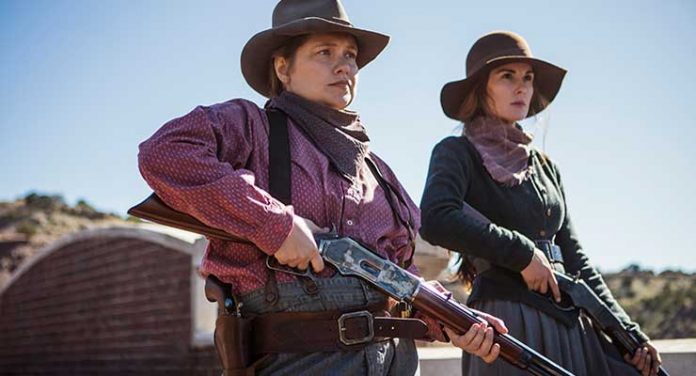 The film industry once labeled western movies as “oaters,” but the Netflix Original Limtied Series Godless has truly dark dramatic elements like those in Unforgiven and Heaven’s Gate as this seven-episode series pits the “gray” hats against the “gray” hats.

In the mining town of La Belle, nearly all the men were wiped out in a major mining disaster two years earlier. The remaining resilient women begin the movement to resurrect not only the mine but also to restore the town’s social order. As the series opens, we witness a brutal train robbery in which faux fundamentalist preacher Frank Griffin (Jeff McDaniel) and his desperados wipe out all but one of the passengers. Gang member and Griffin’s “adopted” son Roy Goode (Jack O’Connell) makes off with the loot and, in the process, shoots Griffin whose wounded left arm is later amputated. Goode is also seriously wounded and makes his way to twice-widowed Alice Fletcher’s (Michelle Dockery) horse ranch. Once there, Goode is again shot, this time by Alice who then tends to his wounds as he recovers. Roy is a natural “horse whisperer,” tames Alice’s steeds, and teaches her half-breed Paiute son Truckee (Samuel Marty) how to ride and hunt. 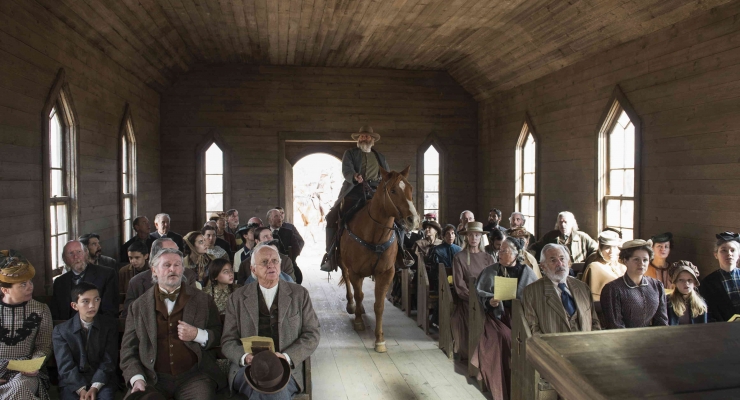 Roy gets reading lessons from Alice and comes across a letter from his long-lost brother Jim who like him was “adopted” by Frank Griffin after they had been orphaned. Brother Jim invites him to reunite in Atascadero, California but not before Roy and Alice get chummy in the stable.

The Quicksilver Mining Company, headed by J.J. Valentine (Christopher Fitzgerald), sees an opportunity to resurrect La Belle’s boarded up mine and installs slimy Ed Logan (Kim Coates) as the new law officer in town once the rights to the mine have been sold. Unfortunately, local newspaper editor A.T. Grigg (Jeremy Bobb) calls undue attention to the town that has harbored Roy Goode. This news reaches Griffin and his riders head out with the intention of punishing all who aided Goode and destroying La Belle like they did earlier in to the community of Creede, Colorado. To make matters even worse, Valentine’s men have stolen most of the horses in La Belle so the townspeople will need to make a brave last-ditch stand to defend their homes from the Griffin gang.

While there are numerous backstories and subplots, Godless comes down to the ultimate showdown between Griffin and Goode. Before its seemingly foregone conclusion, the series acquaints its audience with the culture of the undeveloped western territories, the mores of women who sleep with strange men because that is their only option, and the hidden strengths that people call upon when put to their final test. Writer/director Scott Frank weaves a terrific tale of the Old West as the suspense and body counts continue to mount. In fact, it is the latter element that may prove discomfiting to potential viewers, as the wholesale killing scenes are quite graphic. Daniels, O’Connell, Dockery, Wever, McNairy and their supporting cast members deliver superb performances in Godless, and there is the luxury casting of Sam Waterson as Santa Fe Marshall John Cook in a brief supporting role. Cinematographer Steven Meizier’s cameras give us a stunning portrait of the West in 4K Ultra HD (with available HDR in either HDR10 or Dolby Vision depending on your equipment) backed by Carlos Rafael Rivera’s big authentic-sounding Western score. This limited series is one of the very best things that Netflix has produced this year and gets my highest recommendation.

Godless is now streaming in its entirety on Netflix