Part 3 of Money Heist opens two years later as the group has dispersed around the world in secluded locations like a Thailand seaside resort (Professor, Raquel) and a Panamanian island (Rio, Tokyo). The gang’s idyllic lives are interrupted when Rio is tracked down durig a satellite call to Tokyo (who has left him), and then incarcerated and tortured by the Spanish Intelligence service.  The Professor adds Berlin’s old buddy Martin AKA Palermo (Rodrigo de la Serna) to the group, and now plans to rob the Bank of Spain to negotiate Rio’s freedom. 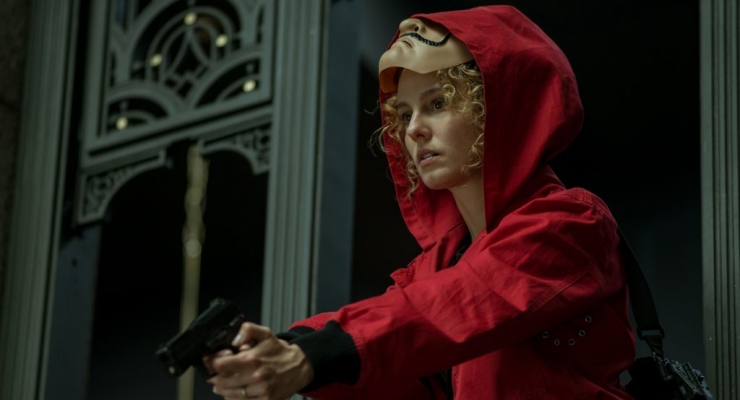 What follows is a high-speed journey, kicked off by blimps with Dali-mask logos dropping millions of euros on unsuspecting crowds below, creating chaos and gaining them media celebrity. Following their previous strategy, the Professor’s gang invades the bank, takes hostages and begins the process of converting its gold ingots into small granules for easy transport.  Coronel Prieto has been replaced by ruthless Coronel Tamayo (Fernando Cayo) and Raquel by pregnant Police Inspector Alicia Sierra (Najwa Nimri) who is even more ruthless and more dislikable than her commander.

This greatest attempted robbery in Spain’s history was really the brainchild of the Professor’s late father who died during his robbery attempt years earlier. The cat-and-mouse game between the Professor and Inspector Sierra escalates when the bank robbers crash a vault containing red boxes of state secrets that, if publicly released,  could cause a massive government scandal.  As it turns out, daily demonstrations supporting the Professor’s gang continue to embarrass the politicians and fuel a movement to get Rio freed.  As the long arm of the law extends its reach to the Professor, Raquel and their team, it is unclear whether their planning will enable them to maintain their freedom and hang on to their huge fortunes.

Much in the same vein as The Italian Job, and Ocean’s Eleven, Money Heist: Part 3uses an amazing array of chess-like moves to keep this gang on course to its ambitious goals. The show’s twists and turns occur at breakneck speed and will continually keep viewers off balance during its eight episodes. What sets this season and this show in general apart from the usual bank caper is the meticulous development of its characters and the complexities of their interpersonal relationships.  The carefully detailed planning that is told in flashbacks in a Cistercian monastery, the group’s singing of “Bella ciao,” an anti-fascist partisan rallying anthem,  and the elevation of a bank heist into a resistance movement against a corrupt government puts a lot on the table. Fortunately, this superb cast and show creator Alex Pina deliver a true masterpiece that is at the top of Netflix’s 2019 offerings. For non-Spanish speakers, there is a well-done English language dubbed version. If you have not seen Parts 1 and 2, I would recommend starting with those first—they will fly right by—and Part 3 will be even more enjoyable.  Highest recommendation and, by the way, Part 4 is currently in production. Can’t wait!!

Money Heist: Part 3 is streaming now in its entirely on Netflix