The latest Netflix Original Series Disjointed is a half-hour stoner comedy with a laugh track. That’s right — a laugh track. More on that later. It is a real treat when you watch a series that critics bash to hell and you find yourself laughing your butt off. I had not seen any previews other than Netflix suggesting the show for me to watch and seeing Kathy Bates’ head in some of the print marketing materials. I had a Sunday to kill recently and binged the entire first part of the first season in a couple of hours. The show is listed as thirty minutes each episode, but it varies (each episode is between 22-30 minutes each) and since it’s Netflix) there are no commercials of course.

As soon as I started watching the first episode I started cracking up along with the laugh track. Yes, as previously stated, there’s a laugh track in this Netflix Original Series. If you hate laugh tracks and can’t make your brain forget it’s there, the show may not be for you. If you want loud, crass, pothead humor then this is the show for you. Note: I am not a pothead and do not smoke weed for leisure. I do enjoy a crass and irreverent comedy, however, and Disjointed fits that bill. It also helps that the entire cast is so damn likeable.

Kathy Bates stars as Ruth Whitefeather Feldman, the owner and proprietor of a marijuana dispensary in Los Angeles. The show follows her antics of being a former (and current) hippie and feminist. Together with her son, they run the pot shop and are assisted by a team of “budtenders.” The focus of the show doesn’t always focus on the employees of the weed shop — it also focuses on some of the interesting variety of customers that come through the shop.

Disjointed also has tons of spoof commercials that revolve around marijuana and the use of pot. Some of these fake commercials and connecting edits are hilarious. Another nice touch is that they have added some really cool animation scenes that don’t always reflect someone getting high. The show also tackles certain issues that a particular character faces — PTSD. One minute the character is fine and then as he is watching a surveillance monitor animation and scenes of violence start to populate his screen. Sure, it starts out funny but gradually gets scary and hits you with the “message” portion of the show in later episodes. 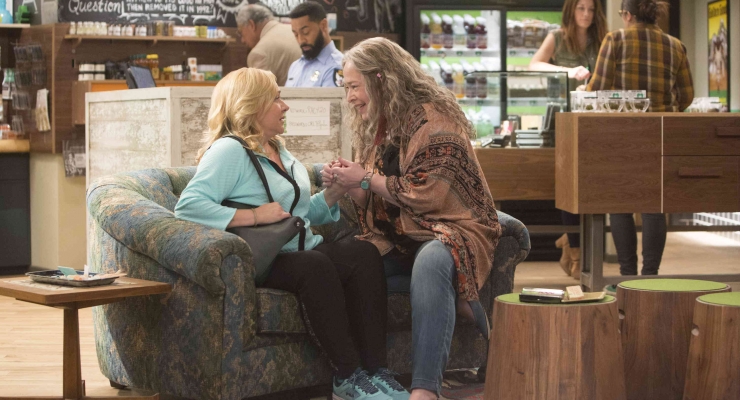 The Netflix Original Series Disjointed has been out for over a month and it is supposedly the worst rated show of the summer. Sorry, that’s not even remotely true. In fact, I would say that it is really petty that folks cannot get past a laugh track. One would think that the comedy would transcend the throwback charm of a laugh track. I also noticed that the season has been split into two parts. Part 1, which is on Netflix now, consists of ten episodes and they are labeled Season one, part one. I am assuming that the other episodes will air in the future — I am not sure if they’re still being filmed or if they have wrapped.

Who would have thought that Kathy Bates could be funny? I know she can be intense and I have seen her be creepy in things like Misery (set to be reissued in a new 4K restoration November 28th on Blu-ray from Scream Factory) and Dolores Claiborne. I am being facetious about her being funny, of course. It was just so refreshing to see a show and folks that did not take themselves too seriously. Yes, the show does generalize a bit in terms of “stoner” humor, but what would you expect? The show takes place in a dispensary 98% of the time.

Chuck Lorre is the co-creator of the show and I think he has a winning “formula” on his hands. I do not know how Netflix calculates its ratings, but since season two has a 2018 release date on IMDB then I am hopeful the show comes back. I recommend Disjointed — laugh track and all.

Netflix Original Series Disjointed Season One, Part One is available in its entirety for streaming on Netflix.