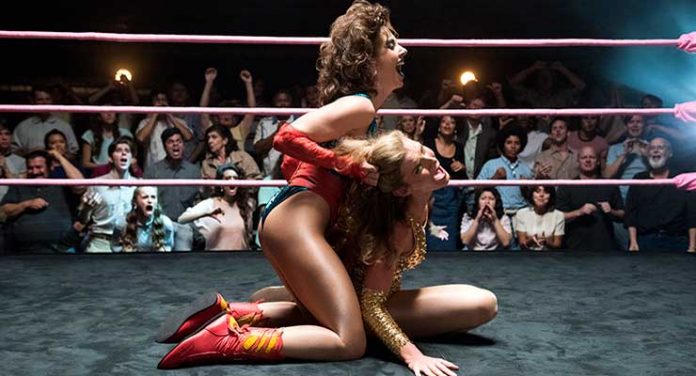 Ruth Wilder (Alison Brie) has a resume of failed acting auditions in the television world of 1980s Southern California. At her gym with other Hollywood wannabes, Ruth tones up with best friend and new mother, Debbie Eagen (Betty Gilpin).  Their friendship will be fractured after Ruth has a furtive one-nighter with Debbie’s philandering husband Mark (Rich Sommer). A very unusual casting call takes Ruth to a different gym where she meets washed-up schlock film director Sam Silvia (Marc Maron). Sam is recruiting a bevy of unusual women for a television show, the Gorgeous Ladies Of Wrestling or “GLOW”. Ruth gets cut but returns to the gym in full costume where an irate Debbie confronts her and as the two women tussle in the ring, Sam envisions the well-endowed Debbie as “Grace Kelly on steroids” and the star of his women’s wrestling show.

Producer Sebastian “Bash” Howard (Chris Lowell) is dependent on his wealthy purse-string holding mother Birdie (Elizabeth Perkins). He invites the GLOW group to a “bash” at his mansion and has creative differences with Sam (that are eventually resolved).  GLOW “ring” monikers are handed out to everyone except Ruth that include sexy Debbie as “Liberty Belle,” chunky Carmen Wade (Britney Young) as “Machu Picchu,” foxy Cherry Bang (Sydelle Noel) as “Junkchain,” and bigmouth Melanie Rosen (Jackie Tohn) as “Melrose.”

The “gorgeous” crew “begins to “take shape,” as the women are moved to the cheapo Dusty Spur Motel to work and bond but the odd coupling of Ruth and psychologically unhinged Sheila “the She Wolf” (Gayle Rankin) fails to gel. Carmen takes Debbie and Rhonda “Brittanica” Richardson (Kate Nash) to see their first “real” wrestling match, and “Liberty Belle” gets her bell rung during a “stiff” post-match encounter with ring muscle man “Steel Horse” (Kevin Kiley, Jr.). 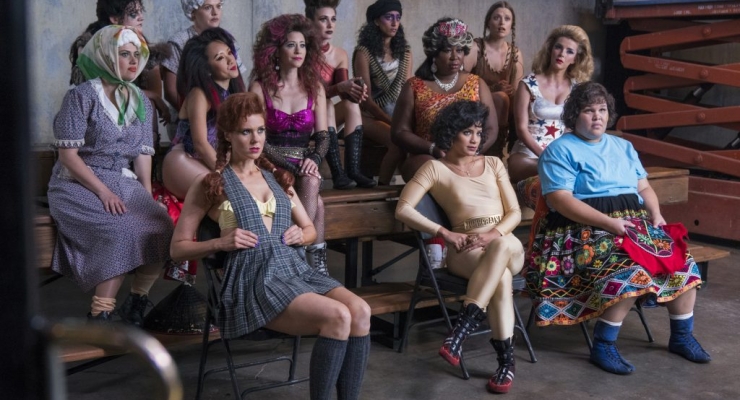 The GLOW’s filmed wrestling debut before a “packed” house of dozens becomes a comedy of errors, until a zany ring finale saves the day. This series is chockfull of chuckles: Ruth’s pretty good Yentl number for a young Russian man who has just survived his briss; a locker room scene in which the women discover that their menstrual cycles have synched; Bash’s crashing his mother’s charity affair to raise money for the GLOW’s next wrestling show by passing the women off as recovering crack-heads. But it is not all laughs as GLOW takes on some pretty weighty topics like unwanted pregnancies, adultery, illegitimate children and mental illness.

Inspired by the true story of 1980s female professional wrestling shows on television, GLOW delivers a written, well-directed series whose ten 30-minute episodes move at the speed of light.   This is also Netflix’s best female ensemble since Orange is the New Black. Brie Larson and Betty Gilpin nail their respective roles as the needy method actor and the former soap star trapped with a new baby in a failing marriage. While the men are seriously outnumbered, Marc Maron epitomizes the self-centered middle-aged man who objectifies women while Chris Lowell is a visually outlandish success-starved mama’s boy. Where GLOW surmounts most of its competition is in its ability to clearly define the characters of a large cast and make us really care about what happens to them. There is already buzz about a Season 2 and I would really like to see more of these women’s adventures inside and outside of the ring. Highly recommended.

GLOW: Season 1 is available for streaming in its entirety on Netflix. The series is available in 4K Ultra HD and HDR (in both HDR10 and Dolby Vision).