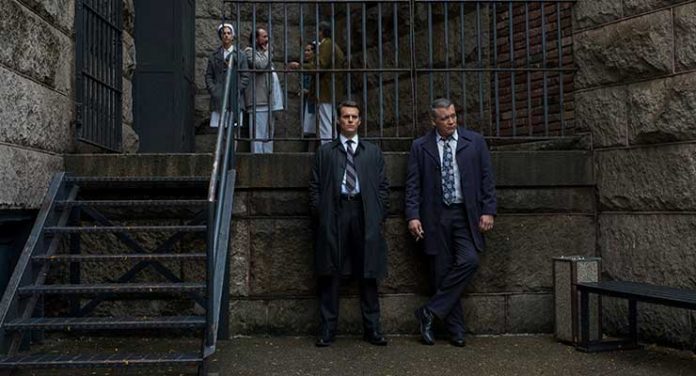 Occasionally, truth can be stranger than fiction and this dictum certainly applies to this new 10-episdoe Netflix Original series, Mindhunter. Based on the book, Mind Hunter: Inside the FBI’s Elite Serial Crime Unit by retired FBI agent John E. Douglas and crime writer Mark Olshaker, the lead characters are modeled after agents Douglas and Robert Ressler and psychologist, Dr. Ann Wolbert Burgess. The show opens in 1977 at the Federal Bureau of Investigation training and research headquarters in Quantico, Virginia.

Young hostage negotiator, FBI Agent Holden Ford (Jonathan Groff) has just failed to prevent a hostage taker’s suicide, and, discouraged, he returns to HQ. Ford locks horns with unit chief Shepard (Cotter Smith) when he declares that the bureau’s crime prevention tactics are flawed because it has a poor understanding of psychopathic personalities. As his “reward,” he is relegated to a dreary basement office in the Behavioral Science Unit building and partnered with veteran agent Bill Tench (Holt McCallany).

Ford and Tench go on “road school” trips to teach FBI crime-fighting strategies to local police forces and later meet noted Boston University psychologist, Dr. Wendy Carr (Anna Torv). Carr encourages the two agents to interview convicted “sequence,” i.e., serial, killers: “Psychopaths are convinced that there’s nothing wrong with them, so these men are virtually impossible to study, but you have found a way in near perfect laboratory conditions.” Chief Shepard, initially skeptical about the value of the agents’ undertakings, has enabled the agents to obtain several large research grants from the Departments of Justice and Law Enforcement. Dr. Carr becomes an “unofficial” member of the FBI team but must later weigh an official FBI job offer that would compel her to leave her closeted lesbian relationship with her university department head, Dr. Annaliese Stilman (Lena Olin). On a rare evening off, Holden picks up pretty University of Virginia psychology grad student Debbie Mitford (Hannah Gross) at a local bar, and their relationship gradually heats up. 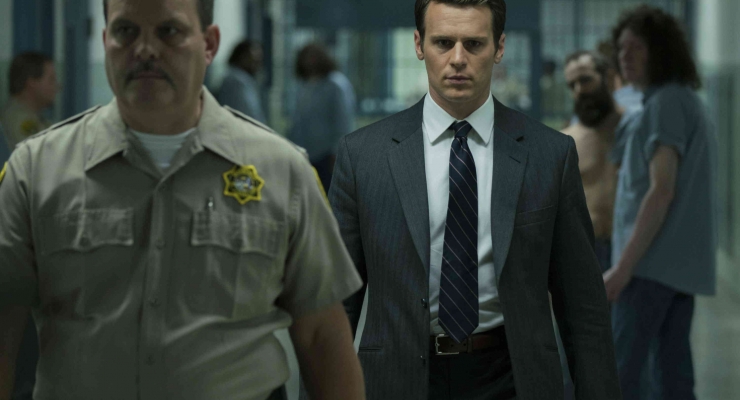 The agents begin to visit police forces in towns near major prisons where these men are incarcerated and start recording their “off the books” conversations. The agents delve into the family backgrounds, personality traits, and motivations of some creepy killers like big Ed Kemper (Cameron Britton), Richard Speck (Jack Erdie), and Jerry Brudos (Happy Anderson). For viewers interested in how the FBI developed its established practice of criminal profiling, this show addresses some but not all the lingering questions regarding the validity of this psychological methodology. On their road trips, Tench and Ford occasionally use their new interview techniques in the investigation of local criminal cases: the grisly murder of pretty babysitter in Altoona, Pennsylvania, and, later, the rape and murder of a middle school cheerleader in rural Georgia.

Mindhunter offers occasional insights into the lives of its principal characters. The once-romantic relationship between workaholic, ingenuous Holden and sexy feminist Debbie has become increasingly strained. Bill’s domestic life is continually challenged by the behavior of his autistic adopted son Brian (Zachary Scott Ross). Wendy valiantly attempts to balance her academic theories against the real-life issues of the criminals that they are studying. There is an honest portrayal of the hurdles placed in the way of this special FBI team, including internal investigations of its techniques employed on the convicts interviewed. Viewers should be cautioned that this dark and disturbing series often uses strong language and graphic crime photos. Mindhunter is a show that at once fascinates and repels but there is never a dull moment. In several episodes, we catch glimpses of a sinister-appearing ADT serviceman (Sonny Valicenti) who might be another serial killer and a subject of Season 2 that already been announced to air some time next year. Highly recommended.

Mindhunter is now available for streaming on Netflix.