Stranger Things 2  picks up from the first season that introduced us to four likeable middle-schoolers, Mike Wheeler (Finn Wolfhard), Will Byers (Noah Schnapp), Lucas Sinclair (Caleb McLaughlin), and Dustin Henderson (Gaten Matarazzo). The boys have just completed the adventure of their young lives, having crossed paths with the strange girl Eleven (Millie Bobby Brown), dealt with a  scary monster, and rescued Will from an alternate universe, “the upside down” .

A year later, Halloween is fast approaching in 1984 Hawkins, Indiana, as the friends are dispensing their pocket change into the games at the local arcade. “Max” (Sadie Sink), a California transplant joins the boys’ class and turns out to be an arcade game wizard whose handle is “Madmax.” She is burdened with a nasty narcissistic older stepbrother Billy (Dacre Montgomery) who is driving her to school in a bitchin’ sports car while her parents are conveniently out of town. Anxiety-ridden Joyce Byers (Winona Ryder) is being romanced by her former high school classmate and now electronics salesman Bob Newby (Sean Astin). Sheriff Jim Hopper (David Harbour) is secretly harboring Eleven in his remote cabin. The young girl has miraculously survived apparent self-destruction in Season One. When Hopper is called away to investigate a decimated pumpkin patch that later proves to be a portal to the “upside down” world, Eleven starts pouring through some of his criminal case files. Neurologist Dr. Sam Owens (Paul Reiser) at the DOE Laboratory evaluates Will who is experiencing disturbing visions that might be related to the dark universe that held him hostage for most of Season One.

The pace picks up when Dustin discovers an unusual “pollywog” in his bag of Halloween candy, nicknamed “Dart,” that later morphs into a very scary carnivorous creature or “demogorgon.”  Eleven has located her birth mother from Hopper’s files that lead her to find her addled-brained Terry Ives (Aimee Mullins) and, briefly, her long-lost “sister” Kali or “Eight” (Linnea Berthelsen) who shows her how to enhance her telekinetic super powers. 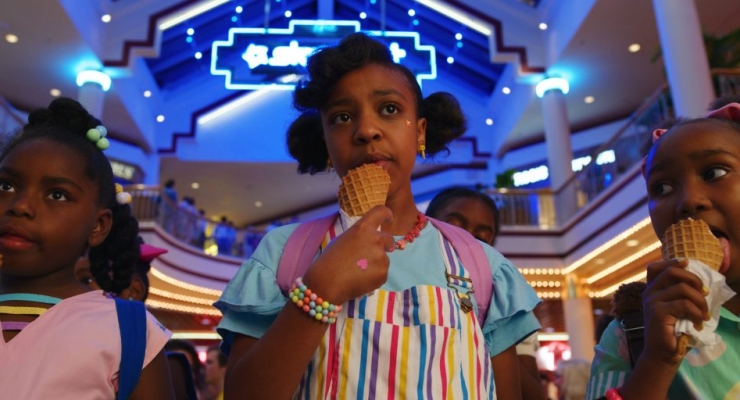 Nancy Wheeler (Natalia Dyer), Mike’s older sister and Jonathan Byers (Charlie Heaton), Will’s big brother, get escorted to the DOE laboratory and receive Dr. Owen’s personally guided tour of the growing threat posed by an expanding alternate universe that must now be kept under control with a flamethrower. It is now clear that Will has become possessed by the “upside down” world and as his declining health gets him another referral to Dr. Owens, successful treatment and his recovery are becoming less likely.  Eventually this “upside down” world will involve most of the show’s main characters in an epic struggle against the deadly vines and flesh-eating demogorgons that may well cost all of them their lives.

After a well-received first season, Stranger Things 2 powers ahead with heightened special effects, a slew of creepy creatures, and plenty of heartwarming moments shared among the four young principals. The Duffer Brothers reprise their deft homage to the 1980s, its music, wardrobes, hairstyles, and sci-fi flicks. A strong cast contributes excellent work with enhanced roles for Millie Bobby Brown and Noah Schnapp. There is the welcome addition of badass left-coasters Sadie Sink and Dacre Montgomery while veteran character actor Sean Astin adds much-needed teddy-bear comic relief, mitigating some of this show’s pervasive darkness.  Building on the solid foundation of Season One, the Duffers deliver a Season Two that surpasses its predecessor in dramatic tension and character development. Judging from some ominous images at the end of the final episode, a third season, slated for next year, will be a much
anticipated Netflix renewal. Stranger Things 2 is highly recommended.

Stranger Things 2 is streaming now in its entirety on Netflix.