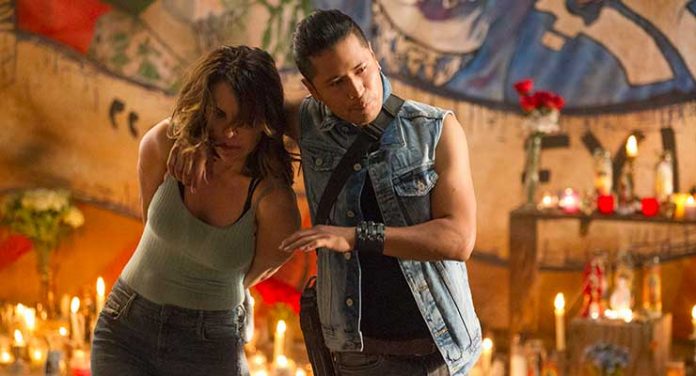 In the penthouse of a high-end Mexico City hotel, President Diego Nava (Erik Hayser) has just received divorce papers from his wife Emilia Urquiza (Kate del Castillo) and the couple later engages in a knock-down-drag-out fight during which Emilia is rendered unconscious. She awakens after her husband has apparently been catapulted over a balcony and his dead body has landed on the roof of their SUV. This new Mexican telenovela now begins in earnest, as scheming Press Secretary Ana Vargas-West (Erendira Ibarra) and Secretary of the Interior Jose Barquet (Alvaro Guerrero) try to do damage control before news of the President’s death reaches the public. The murder case against the First Lady may not be so open-and-shut as we will later find out that an unreleased Presidential address was recorded before the marital set-to, and it contained some very inflammatory remarks.

Barquet and Secretary of Defense General Augustin Aguirre (Marco Trevino) are certain that Emilia will be quickly apprehended as she had a tracking chip implanted in her body. But not so fast, as the resourceful Emilia hacks out the chip and becomes “invisible” to the government surveillance systems. Her confidant, Colombian ambassador Jaime Bray (Diego Cadavid) promises to relocate her to his country but this plan falls through when he too is killed. Later, ex-con Canek Lagos (Alberto Guerra) carries an unconscious First Lady into his Aunt Chela’s apartment in the Tepito barrio. Chela and Canek will facilitate her escape through the “drug cartel tunnels” with the help of Zyan Torres (Tamara Mazarraza) and her loose-cannon accomplice Christopher “Chris” Lopez (Harold Torres) but, as is typical of this series, all plans are subject to change. 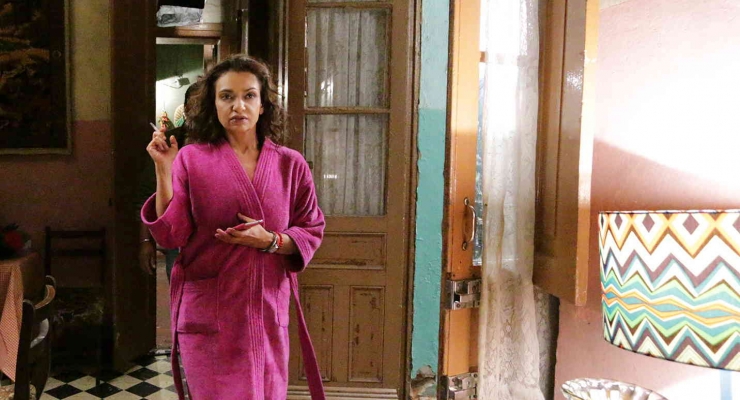 Hacker extraordinaire Ovni (Maxi Iglesias), Chela’s “boy toy,” cracks into the administration’s surveillance system and enables Canek and Emilia to gain access to the hotel penthouse where they find the computer card containing the President’s unreleased video address. In it, Nava promises to curtail a military that had made thousands of citizens “disappear” in the name of the ongoing war against drugs. In addition, Presidential orders would have purged the judiciary, police, and penal systems and removed a number of ministers from office, including Secretary Aguirre. The motive for the President’s assassination now appears to be more political than personal as the remaining episodes unravel a very tortuous and surprising conspiracy. To add further tension to the proceedings, Special Prosecutor Patricia Lieberman (Marina de Tavira) is investigating Nava’s death and, with little if any help from the authorities, has started to connect all the dots. In a V is for Vendetta move, Ovni starts streaming the President’s speech to the rapidly growing public, using a white-masked avatar. There remain some sinister characters in this political thriller like General Bruno Almada (Hernan del Riego) and Sr. Urquiza’s aide, Pete Vasquez (Luis Roberto Guzman). As Season One literally hurtles toward its finale, many lives still hang in the balance including those of Emilia, Maria, Don Tomas, Canek, Ovni, Zyan, and Chela.

Netflix streams this telenovela in Spanish (with subtitles in Spanish SDH, English, French, and Chinese) and dubbed-in English. Regardless of the language option selected, the screen action is frequently violent and steamy, leaving little to the imagination, hence the TV-MA rating. The directorial style will be quite familiar to those who have seen the earlier and well-received 63-episode series, La Reina del Sur (Queen of the South), also starring Kate del Castillo. Ingobernable provides the very strong female lead that viewers have come to expect from Ms. del Castillo. This show receives more than capable support from an excellent cast of characters, taut pacing, and a great intro track for each episode, “Me verás (Really me).” While there are some missteps in the script like the lesbian affair between Maria and Prosecutor Lieberman’s assistant Daniela Hurtado (Marianna Burelli) and awkward dramatic reinsertions of Dolores Lagos, Ingobernable remains a welcome small screen newcomer and will hook the many viewers that are already hoping that Netflix will agree to a second season.

All 15 episodes of Ingobernable are available for streaming exclusively on Netflix.