In the first 90-seconds of the new Netflix Original series The End of the F***ing World, we find out that 17 year-old James (Alex Lawther) is a budding psychopath. Eleven years earlier, James witnessed the suicide of his mother Vanessa (Kelly Harrison) and, later, deliberately burned his left hand in a deep fryer, leaving ugly and permanent scars. While he derives pleasure from killing small animals, James now turns his attention to bigger game. However, he more than meets his match in his intended victim, outspoken, freckle-faced classmate Alyssa (Jessica Barden) who is desperate  to escape from Mom Gwen (Christine Bottomley) and reconnect with her long-absent father Leslie (Barry Ward).

James begins to plan how he will murder Alyssa, but things change dramatically when he cops father Phil’s (Steve Oram) classic Mercedes sedan. He drives off with Alyssa, but during an awkward attempt at front seat sex, the car crashes and ends up in a spectacular explosion. The couple starts off on what will become a misadventurous road trip complete with more stolen cars, petty thefts, and, eventually a murder. Alyssa and James break into the upscale home of Professor Clive Koch (Jonathan Aris) who happens to be out-of-town. James snoops around the house and finds a video camera that contains some very disturbing and graphic footage of tortured and sexually abused young women.

Koch returns home unexpectedly and when he tries to rape Alyssa, the Prof ends up on the business end of James’s hunting knife. Clive’s shocked mother Stella (Eileen Davies) finds the body (and later the video camera) as detectives Eunice (Gemma Whelan) and Teri (Wunmi Mosaku) open their criminal investigation. Clues to the identities of Koch’s killer begin to fall into place and the detectives connect dots that will ultimately lead to Alyssa, James, the hunting knife, and the murder. Trying to stay one step ahead of the law, Alyssa finally meets her drug-dealer dad who turns out to be not only a lowlife but also a snitch, as the young couple desperately seek a way to continue their quest for freedom. 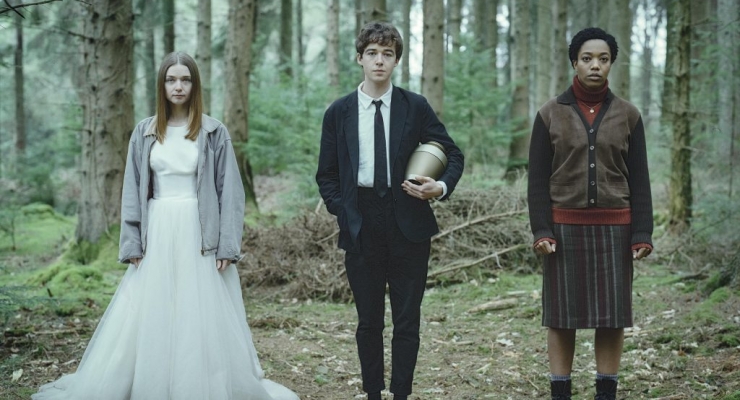 Jessica Barden, Alex Lawther, and Naomi Ackie in The End of the F***ing World Season 2
42 Photos

This coming-of-age show, liberally fueled by adolescent angst, takes pages out of classic crime films like Badlands and Natural Born Killers, but with delightfully and dark comic twists. The lead characters’ inner dialogues carry much of the storyline forward, awkwardly at first, as they explore their nascent feelings about themselves and each other. The super-retro soundtrack, sprinkled with pop hits from the 1950s to the 1980s, adds to the series’ appealing vibe.

The End of the F***ing World is a smartly scripted show that explores the seamier side of life as seen through the eyes of innocents who grow up quite rapidly during the span of its eight brief episodes. Viewers are inevitably drawn into a world that adults might not completely understand but one that becomes emotionally credible and makes us care what happens to the two little lambs that have gone very much astray. While the characters of James and Alyssa originated in a graphic novel by Charles S. Forsman, it is the three-dimensional impersonations by Alex Lawther (The Imitation Game) and Jessica Barden (The Lobster) that bring them very much to life on the screen. As a millennial-oriented show, writers Charlie Covell and Jonathan Entwistle make certain that the adults usually come off quite poorly (boo!) and that we will root for the kids (yay!) all the way to Season One’s somewhat uncertain ending. Netflix Originals should be commended for what is certain to be one of the new year’s best shows and, hopefully, The End of the F***ing World will be given a second season for us to enjoy .

4 / 5 TheaterByte Rating
{{ reviewsOverall }} / 5 User Rating (1 vote)
Jonathan EntwistleShow Creator
4 Jan. 2018Original Release Date
NetflixNetwork/Streaming Service
25 Mins.Ep. Run Time
8No. Eps.
Clerkenwell Films | Dominic Buchanan Productions | NetflixStudio/Distributor
TV-MARating Certificate
The Creative Content
Summary
James, A 17-year-old loner who is pretty sure he's a psychopath (Alex Lawther), meets temperamental new girl in school Alyssa (Jessica Barden), and the two embark on an eventful road trip to go find her real dad that will change their lives forever. This new global Netflix Original is a clever, edgy coming of age dark comedy that takes two lonely teens on a road trip laden with misadventures and violence that is punctuated by comic moments as the young leads rapidly grow up in a world that is often seamy and unfriendly.
What people say... Login to rate
Order by: