As the 1930s unfolded, war clouds were gathering over the European continent, generated by Nazi Germany and their Fuhrer Adolf Hitler. Against this backdrop, American President Franklin D. Roosevelt had adopted a “watchful waiting” approach as the subjugation of most of Germany’s neighbors had already started by the time that this decade had concluded. Meanwhile, Hollywood was cranking out some very powerful films that issued from the studios in which legendary directors were plying the craft: John Ford (The Grapes of Wrath), John Huston (The Maltese Falcon), Frank Capra (It’s a Wonderful Life), William Wyler (Mrs. Miniver), and George Stevens (Woman of the Year).

What may not be so well known is that all five of these famous men volunteered to provide their services to direct documentary films about World War II as members of the various uniformed services. John Ford, Commander in the US Navy, headed the Office of Strategic Services photographic unit and was present both at D-Day and the Battle of Midway where he was wounded in the process of making a documentary film. Stevens was also present at D-Day and contributed the only color film documenting the landing itself; he also entered Paris to film its liberation. His war concluded with the discovery of the Nazi concentration camps as his cameras captured evidence later used in the trials of war criminals. Wyler was a Major in the Air Force and put himself in harm’s way during the filming of Memphis Belle: A Story of a Flying Fortress, while Army Captain Huston made three documentaries (two of which were censored for decades). Capra enlisted as an Army Major and, working under General George C. Marshall, created the successful Why We Fight documentary series. 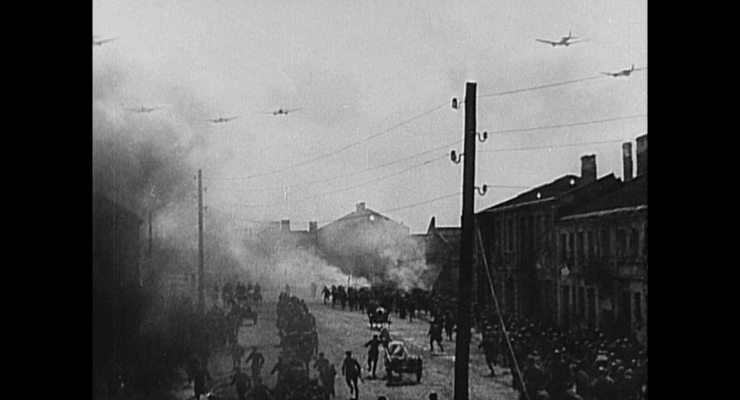 This Original Netflix mini-series, Five Came Back, is based on Mark Harris’ book of the same title and gives a chronological account of the stories of these five directors and their World War II experiences in three hour-long episodes:

The first episode opens with the winds of war begin to blow and, as illustrated by the propaganda films of German director Leni Reifenstahl such as Triumph des Willens (Triumph of the Will) and Olympia, such cinematic efforts effectively boosted the spirit of nationalism that fueled the Third Reich. Impressed by the power of these films, the United States government began to consider how it could turn the influence of the Hollywood film industry to make cinematic vehicles that would raise American morale and garner support for this country’s entry into World War II following the Japanese attack on Pearl Harbor.

Editor Will Znidaric reviewed more than one hundred hours of archival footage and cobbled them into just three one-hour episodes. We get to see the adventures (and some misadventures) of the five directors whose personal foibles such as Huston’s womanizing and Ford’s substance abuse were well known in the film world. In addition, there was overt competition among the directors to gain the greatest notoriety through the films that they were making although, at the beginning, these efforts exposed their obvious inexperience in this genre. But, as the war progressed, more sophisticated (and occasionally staged) films started to appear and their quality gradually improved until they became some of the first classic documentaries of their times.

Five Came Back is narrated by Meryl Streep and includes pointed commentaries from five of today’s best known film directors: Steven Spielberg, Lawrence Kasdan, Guillermo del Toro, Paul Greengrass, and Frances Ford Coppola. This very gifted quintet brings their individual insights to the films that are highlighted in this series. What also comes through on repeated occasions, is how these films underscore some of the societal issues of World War II’s America: xenophobia (the internment of Japanese Americans), and racial prejudice (the treatment of “Negro” soldiers). Unfortunately, there is also graphic depiction of the horrors of war, showing images of American soldiers lying dead on the various battlefields. We find out how the war experiences changed not only its combatants but also those who like these Hollywood directors participated in their documentation on film.

This series exemplifies how historical documentaries should be made. It is personal without being heavy-handed, it does not preach from the pulpit but informs and enlightens, and it is fundamentally a collection of real-life stories that everyone should see, whether or not they are ardent cineastes. Highest recommendation.

Five Came Back is available now in its entirety for streaming on Netflix.