Screenwriter Andrew Davies has been adapting literary classics for decades and now takes on the sprawling Victor Hugo novel, Les Misérables (The Wretched Ones) for PBS Masterpiece. Viewers familiar with the original characters will notice some obvious differences in this new version with the casting of innkeeper Thénardier (Adeel Akhtar) and Inspector Javert (David Oyelowo) as Frenchmen of color that immediately identifies them as outsiders.

This complex tale of crime, punishment, pursuit, and redemption revolves around two men: Jean Valjean (Dominic West),  an inmate of the Toulon prison hulks, and prison guard Javert who becomes his nemesis. After Valjean is released from prison, his life changes when he pilfers silverware belonging to his temporary host Bishop Myriel (Derek Jacobi). The cleric gets him freed from police custody by telling the officers that the silverware was a gift and he adds a pair of silver candlesticks to facilitate the ex-convict’s fresh start.

Several years pass, and Valjean, known as Monsieur Madeleine, has become a wealthy factory owner and mayor of Montreuil. He hires single mother Fantine (Lily Collins) so she can pay Thénardier and his wife (Olivia Colman) for keeping her child Cosette (Mallow Defoy). Javert, now Montreuil’s new Chief of Police, is about to jail Fantine for assaulting a townsman until the mayor intervenes. She has recently lost her job and must sell her hair, teeth, and body to support her daughter. When Fantine falls ill, Valjean takes her to the infirmary and vows to bring Cosette back to her.

Hearing that the wheelwright Champmathieu (Anton Saunders) has been falsely accused of Valjean’s theft of 40 sous, Valjean appears in court, confesses his guilt and gets sent back to the prison ship. He soon jumps overboard and makes it back to his village. Valjean eventually finds a dirty, abused Cosette and buys her freedom from the Thénardiers. The two move to a modest Paris apartment where he becomes “Papa” who teaches his “daughter” literacy.   Suspecting that Valjean might be the man whom Thénardier accused of “abducting” Cosette,  the police raid his apartment, but “Papa” and Cosette find safe haven in the local convent. 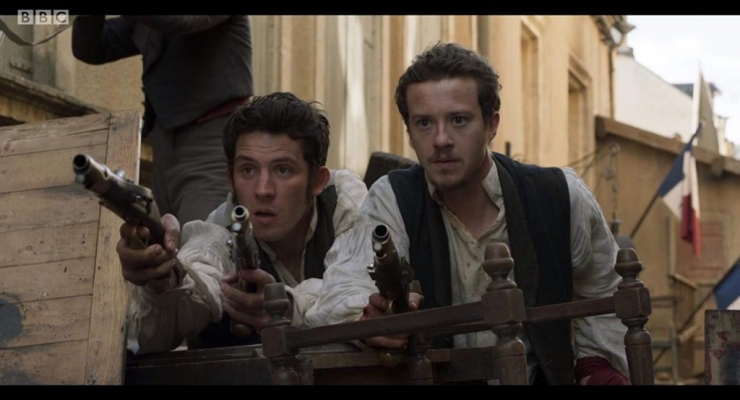 A decade later, Cosette (Ellie Bamber) has become a beautiful young woman who yearns to see the outside world. Strolling with Valjean through the Luxembourg Gardens, she attracts the attention and eventual affection of Marius Pontmercy (Josh O’Connor) a handsome young man who has been raised by his grandfather, the aristocrat Gillenomand (David Bradley). When Marius discovers that the old man prevented him from seeing his late father,  he leaves home and obtains lodgings at Valjean’s former apartment building. His neighbors are the impoverished Thénardiers, now the “Jondrettes,” who have been evicted from their inn along with daughters Éponine (Erin Kellyman), Azelma (Alex Jarrett ) and son Gavroche (Reece Yates).

Marius is enjoying secret trysts with Cosette but he reluctantly joins a student rebellion led by Enjoiras (Joseph Quinn). The young men set up barricades against the French troops but a lopsided battle ensues and Marius is seriously wounded. Valjean frees Javert who had been held hostage by the rebels and, in the story’s most powerful scene, carries the unconscious Marius through the sewers of Paris and safely back to Gillenomand’s house. In this head-spinning account of shifting fortunes, Javert and Thénardier continue to cross paths with Valjean until, symbolically, the sun finally breaks through the clouds that had darkened the previous episodes, bathing the two young lovers and their father figure in glorious daylight.

It is a daunting task to adapt Victor Hugo’s saga to the small screen and the greater length of this BBC six-episode series enables most of the original tale to get told. Veteran television director Tom Shankland keeps the unwieldy storyline taut and exciting, while Stephan Pehrsson’s cameras reanimate 1830s Paris, replete with images of the era’s abject poverty. Les Miz is truly borne on the shoulders of its two principals and this is where Dominic West and David Oyewolo shine as troubled souls who have followed different paths. The supporting cast features many memorable characters like the sleazy Thénardiers, the fine-looking young lovers, and the idealistic students who sacrifice their lives for their cause. Those interested in binge-watching this show, rather than catching than in weekly installments, can access all episodes on the PBS Passport app for streaming devices by making a donation to the network. Highly recommended.

Les Misérables is now airing on the PBS and streaming on PBS Passport beginning April 14, 2019