A hazy flashback of a perfect summer with kids swinging on trees, green grass and apple trees bleeds into present day reality, in a cold dreary prison. With nothing more in common than orange jump suits and a wish to be on the outside again, Ethan Embry’s Pete talks endlessly of his childhood to the one person who cannot escape, his cell mate Marius.

“Pete, would you shut the hell up? Nothing’s the same anymore.”
Less than thirty minutes into the first episode, Marius sums up the entire theme of the series. Paying homage to the great con movies of our time, the writers weave a complex story with meaningful dialogue. To truly enjoy this show you must first digest the sketchy premise upon which it was built, allowing the writers to pursue a con of their own.

A con man, or as Giovanni Ribisi’s character Marius would say a “confidence man,” assumes the identity of his former cell mate, putting all those irritatingly detailed stories to good use. Staking his life on his newest con- becoming Pete – is more challenging than Marius expected. Thus the premise of the series. Considering the obvious differences between the characters, it’s a difficult concept to swallow. Not only is Pete taller than Marius, they hardly look alike. Sure the family hasn’t seen Pete in nearly twenty years but would that make him this unrecognizable? Luckily, Ribisi employs an almost comedic charm when in character, giving hesitant viewers an excuse to overlook the obvious. Get past that tiny hurdle and this is an excellent show. 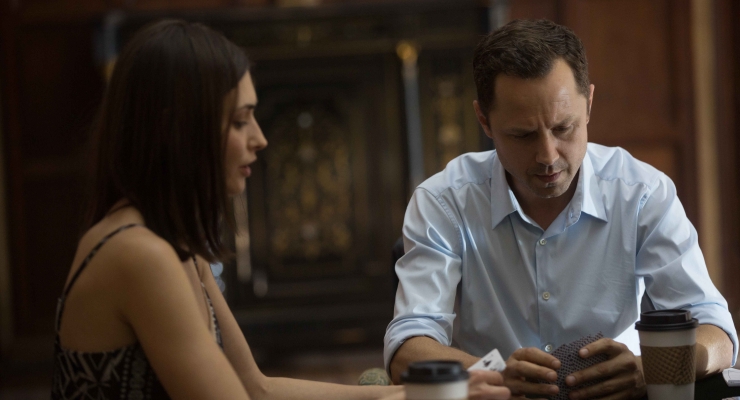 Loosely based on legendary actor Bryan Cranston’s own past, the main character and show’s namesake “Sneaky Pete” was conceived shortly after Cranston’s 2014 Emmy Speech, thanking all the “Sneaky Pete’s of the world.” A nickname he’d earned in his teens for testing the limits of shortcuts. Cranston’s teenage deceptions were the tiny kernel of truth from which this fictional series grew, taking the duplicity of a con to a new level.

In addition to being an executive producer, Cranston eloquently embodies a larger than life crime boss named Vince (a cheeky nod to Vince Gilligan, creator of Breaking Bad). Proving once more why colleagues and fans alike revere him, Cranston’s cameo appearances are captivating and his delivery makes even the lengthiest of monologues entertaining. Cranston has every opportunity to steal the show but instead of hogging the spotlight, he seems to almost beckon the other actors closer. Perhaps it’s all part of the show because seeing Vince on-screen with the others is eerily reminiscent of watching a spider trap flies.

Becoming Pete isn’t easy and not without a few surprises of its own. On the right side of the law, Pete’s family runs a bails bond business a fact that would’ve scared Marius away had he not been so desperate. This latest con may be his most risky yet. With each episode the stakes grow. Scrambling to keep his real brother, Eddie (Michael Drayer) alive Marius must come up with the money he owes Vince while also keeping up appearances as Pete.

Pete’s brother Taylor (Shane McRae) is a rural cop, his cousin Julia (Marin Ireland) is a single mom trying to keep the bonds business a float along with their grandparents, Audrey and Otto. As Marius navigates the family landscape, in search of the big payoff he’s confronted with the reality of Pete’s nostalgia, as some of his cellmate’s stories turn out to be larger than life.

As Audrey, Margo Martindale makes for a convincing Grandma bails bonds-woman. There are moments when it’s hard to tell if she sees through Marius or if she’s just one tough old lady- a testament to Martindale’s skill as an actress. Perfectly paired with Peter Gerety who plays Otto, theses two bring out the best in each other.

Towards the end of the series, Marius is forced into assisting Vince in an elaborate con in exchange for his life. “Do you just want to catch him cheating or do you want to take him down?” asks Marius. Thus beginning the ultimate con that will end the season and shock fans but I won’t spoil it for you. It’ll take a serious amount of will power, or perhaps lack of time, to keep from binge watching this show.

From the first attention grabbing episode of Amazon’s new original series, Sneaky Pete, the series hooks you. As evinced by the end of each episode, show runner Graham Yost (from Justified) believes in ending with a cliffhanger of sorts thus encouraging that binge-watching impulse. If you’re dedicated to watching this over any length of time, or have a binge-watching problem Yost’s advice is “stop in the middle of an episode… if you wait until the end, you’ll let it roll.” I say let it roll.