Season 1 of Tom Clancy’s Jack Ryan saw the transformation of the titular CIA desk jockey/financial analyst into an accomplished field agent who stops an international terrorist from wreaking havoc upon the United States.  As the new season opens, Ryan’s former division chief James Greer (Wendell Pierce) has been transferred to Moscow. In spite of Greer’s recent diagnosis of coronary artery disease, he convinces his chief Carter Estes (Frank Whaley) to transfer him to Venezuela and investigate if Russia is getting involved in this resource-rich country.

Jack tells his former special forces buddy Senator Moreno (Benito Martinez) that the Russians may be transporting unidentified cargo to the Venezuela jungle ostensibly to support the troubled regime of President Nicolas Reyes (Jordi Molla). Ryan and Moreno visit Reyes and his right-hand man General Miguel Ubarri (Francisco Denis). The mission fails and their caravan is ambushed by hitman Max Schenkel (Tom Wlaschiha) that takes out Senator Moreno.  As Jack pursues the threads that connect Moreno’s assassination to some large financial players, he not only finds that Reyes was involved but there is the Vogler corporation with roots in Philadelphia that sees Venezuela is the next treasure trove of rare-earth tantalum essential for making high-tech devices. Jack also gets “friendly” with German operative Harriett “Harry” Baumann (Noomi Rapace), Schenkel ‘s former lover whom she later takes out in London where Ryan has been investigating the shadowy Eprius Company that deals in arms and foreign mercenaries.

The remainder of the nonstop action returns to Venezuela where a  US special ops force led by Matice (John Hoogenakker) searches the jungle for evidence of the Russian shipments. Matice is killed by Venezuelan troops but his comrades escape and aid Jack’s search for Greer who has been arrested twice and is now being “detained” by Reyes’s muscle man Mateo Bastos (Eduar Salas) in a secret prison camp. One of the political prisoners being held there is the missing husband of Reyes’s political opponent Gloria Bonalde (Christina Umana). The impending hotly contested Venezuelan presidential election between Reyes and Bonalde incites continuing street violence that causes American ambassador Lisa Calabrese (Susan Misner) to evacuate the US Embassy in Caracas. Mike November (Michael Kelly), her chief of staff, joins forces with Jack on an all-out mission to uncover the truth, rescue Greer, and take down the crooked Reyes. Numerous surprises wait in store for the audience before the dust finally settles in this eight-episode thrill ride. 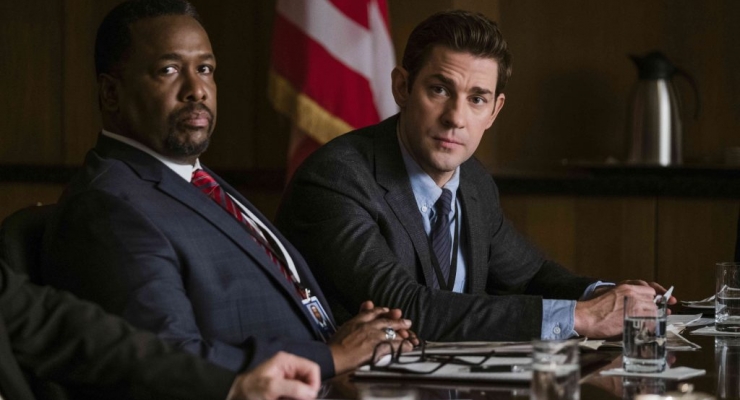 It is often difficult for a second season to equal its predecessor, but this is not the case here. Like Season One of Jack Ryan, there are numerous complexities to the storyline that require the undivided attention of its viewers. With shocking realism, the vagaries of politics reveal that the roots of international finance extend deeply into both American and Venezuelan governments. Be warned in advance that there is no shortage of violence, some of which is quite graphic. Krasinski and Greer reprise their strong performances from Season One, and the new cast additions are simply superb. What makes Jack Ryan a binge-worthy show is its relentless dramatic pulse that maintains its forward progress and will keep viewers glued to their screens. Co-creators Carlton Cuse and Graham Roland are to be commended for maintaining the franchise’s high level of entertainment that has not only established a loyal audience but also augurs well for a third season, rumored to air next year. Highest recommendation.

Tom Clancy’s Jack Ryan: Season Two is available now for streaming in its entirety on the Amazon Prime Video