November 12, 2016. Giachino Rossini’s operatic candle burned brightly but briefly as he completed his last opera, Guillaume Tell, at age 37, and then retired from composing. This opera, best known for its signature overture that introduced the popular radio and television series, “The Lone Ranger,” presents the legend of 14th century Swiss freedom fighter in a score of epic proportions. As a side note, this new Metropolitan Opera production got unwanted publicity when its October 29, 2016 matinee performance was canceled during its second intermission after a powdery substance (that turned out to be human ashes) was tossed into the orchestra pit. 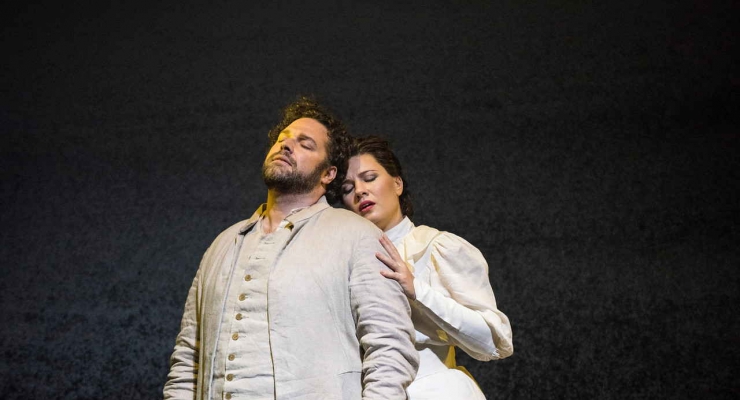 The opera begins on the shores of Lake Lucerne, Switzerland, during a period of Austrian occupation. Tell, his wife Hedwige, and son Jemmy are caught up in this strife-ridden setting exacerbated by Austrian governor Gessler who has imprisoned and eventually executed their loyal friend Melcthal. Arnold, Melcthal’s son, has fought for Austria and is secretly in love with the Habsburg Princess Mathilde. Tell and his colleague Walter Furst win over Arnold’s loyalty and vow to avenge Melcthal’s death, while the young man realizes that he and Mathilde have many obstacles in their path to a life together.

Gessler incurs the wrath of the Swiss villagers and particularly Tell when he compels them to pay him homage. The most famous scene of the opera follows when Tell is ordered to shoot an apple off Jemmy’s head (“Sois immobile”). After Tell succeeds and Jemmy is saved, the archer is  condemned to die in a dungeon filled with wild beasts. Arnold mobilizes his Swiss freedom fighters to free Tell who escapes from the boat carrying him to prison. Mathilde enables the reunion of Hedwige, Tell, and Jemmy who lights the fire that signals the Swiss rebels to attack the Austrians. Tell gets his crossbow back and kills Gessler while Arnold reunites with his beloved Mathilde and the liberation of Switzerland has begun.

Let’s get the knotty issues of staging, sets and costumes out-of-the-way. Director Audi favors an abstract approach that removes this opera from any specific time and place, a staging concept that seems to pervade a number of the Met’s new productions this season. Veteran set designer George Tsypin provides a stark backdrop occasionally dominated by the hull of a boat with a collection of rocks, tubular lights, and swirling clouds and Alpine vistas in the background. Andrea Schmidt-Futterer dresses most of the Swiss in nondescript white and off-white costumes, while the Austrians are clad in black (no subtlety there!).

The vocalism is an entirely different affair with a tour de force realization of the title role by baritone Finley whose recent Opera News interview underscored his passion for this rarely performed opera. This is truly a cast that goes from strength to strength. Soprano Rebeka scores a beautiful rendition of “sombre forêt, désert triste et sauvage,” and young soprano Brugger stars in the few opportunities provided to her. Long time Met favorite mezzo-soprano Zifchak makes the most of her small but important part. Tenor Hymel who thrilled Met audiences in 2012 as Énée in Les Troyens gives the role of Arnold its requisite heroic notes, particularly in his highlight, multi-high C Act IV aria “Amis, amis, secondez ma vengeance.” Bass-baritone Relyea is the consummate villain and his snarling delivery of Gessler is perfectly en pointe. Basses Youn (who seems to be in everything this season) and Spotti are most sympathetic colleagues. Maestro Luisi draws out much of the incredible beauty that Rossini invested in this extremely long (four and a half hour) score while keeping the often-deliberate tempi from dragging down the musical pulse. Donald Palumbo’s Met Opera chorus as usual covers itself in glory.

Guillaume Tell has concluded its run for the 2016-17 season and provided thousands of operagoers an opportunity to see an unjustly neglected masterpiece. Weighed against Rossini’s copious operatic output, this work stands as the composer’s crowning achievement. More information about this and other productions of this season can be found at the company’s website www.metopera.org.