The name Bowers & Wilkins is nearly synonymous with high-end audio. It evokes lavish sound systems obtainable only through custom installers and exclusive retailers often by appointment only and at prices so high that, if you need to ask what it costs, then you probably shouldn’t be looking into B&W’s in the first place. So, the fact that the manufacturer would move into the iPod dock/speaker space and make them available at online retailers, including Crutchfield and Apple, and in the case of the Zeppelin Mini, at a SRP of only $399.99, is indicative of the gadget’s ubiquity and the growing strength of the iPod speaker market. It is hardly an “audiophile” market, per se, but it cannot be denied that a large percentage of people are consuming their music through downloads on the tiny gadgets and want and need a place to playback that music in their homes other that through tiny earbuds or tinny laptop speakers.

With a growing number of people replacing their boomboxes and, much to the chagrin of audiophiles everywhere, their standalone stereo systems with iPods and iPod speakers (I personally know some people who have no stereo systems at all, only iPods and a speaker to dock it to and playback their music at home) the market is ripe for an audiophile company to step in with a product that can appeal to those people looking simply for something to act as a background music player and for those with a more discerning ear. In steps B&W with their line of Zeppelin iPod speakers. 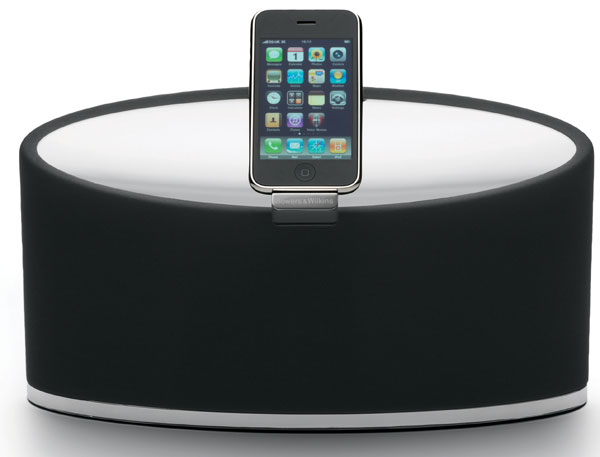 Get the “Led” Out

The Zeppelin Mini, younger brother to B&W’s larger Zeppelin, was designed with playback in smaller rooms in mind.  Its sleek continuous curve design weighs in at only 2.5kg (5.5 lbs) and measures 200mm (6.8 in) H x 200mm (6.8 in) W x 200mm (6.8 in) D. A black cloth grille covers its dual speaker design. On the top, the iPod dock connector resides on an arm with a 90-degree swivel radius allowing for Cover Flow operation and the ability to watch videos in widescreen mode utilizing more of your precious screen real estate. Beneath the swivel arm is a shiny metallic-looking base that sits across the entire top of the Zeppelin Mini, giving it a highly modern look. This speaker will definitely fit in any décor, alongside most contemporary electronics, or even in any up-to-date office or kitchen.

On the right side of the Zeppelin Mini are the power button and up and down volume controls and the power button. The buttons lie flush against the unit and can be difficult to put your finger on during normal operation. They are also spaced fairly close together. I often found myself hitting the power button instead of the “up” volume button, which can quickly become a nuisance.

The bottom front of the unit has an indicator LED that glows red, yellow, green, orange, blue, or white, depending on the state of the unit. It will be red when the speaker is off,

The buttons on the remote are too closely spaced

There is also a remote control provided that is shaped like something akin to a flattened egg. It provides only basic controls — play, pause, next, previous, volume up, volume down, power/standby and a button to cycle through the Zeppelin Mini’s three operation modes, Dock, USB, and Aux. Like the buttons on the side of the unit, the remote control buttons are too closely spaced and I once again found myself consistently hitting the power button in place of the volume up button.

The Quick and the Dread?

The rear of the unit contains the rest of the connectivity options including a USB 2.0 port used for streaming directly from a Mac/PC as well as receiving software updates and an analogue stereo mini-jack that can be used to connect any audio device like a CD player or other, non-iPod mp3 players for playback through the speaker.

In addition to being a speaker, the Mini can also be used as a simple dock, and users can sync and charge their iPods and iPhones directly through the unit. At first when I synced my iPod using the Mini, it caused the speaker to freeze up and I was unable to use it until I unplugged it from the power supply and restarted the speaker. When I contacted B&W, they let me know that there was a firmware update available for the unit that resolves this issue. After downloading and installing the latest firmware, syncing was no problem.

On my Mac Book, loading the firmware onto the Zeppelin Mini was simple. After downloading and installing the installation app, all I needed to do was to run the firmware app, unplug the power supply from the back of the Mini, hold down the standby button on the side of the unit while plugging the power back in until the indicator light turned white, and the firmware loaded.

Syncing the iPod is even simpler. While the iPod is docked and the Mini is in standby mode (the indicator light is red), hold down the standby button for two seconds until it turns yellow and the iPod begins to sync.

Once the Mini is in standby mode and there is an iPod/iPhone docked, it will charge the battery.

Mixing up a Playlist

Time to put all that technology to the test to see if the Zeppelin Mini can deliver on the B&W name and reputation. I went through a variety of files on my iPod and from my hard drive encoded in AAC, Apple’s file format, either in lossless at 44.1kHz/16-bit, or 320kbps.

I started with “Let Me Touch You For a While” by Alison Krauss and Union Station  encoded at 320kbps AAC from the CD layer of the Rounder Records SACD New Favorite played back from the iPod. The first thing I noticed is that the Zeppelin Mini had a far better low-end than I was expecting. It was hardly resounding, but it at least presented the “idea” of a low end. Alison’s voice was upfront and clean and very natural sounding, far better than anything I’d ever heard from other iPod speakers. There wasn’t much in the way of stereo separation, however. I had to move in really close to hear the panning of the acoustic guitar and steel guitars to either side.

I then moved on to Mahler Symphony No. 8 — 1st Movement — Michael Tilson Thomas/San Francisco Symphony encoded in Apple Lossless from the CD layer of the SACD and played back from the iPod. The Mini didn’t do so well with this material. Much of the instrumentation got lost with the constantly fluctuating dynamics, the chorus sounded a bit distorted and harsh, and the strings, whenever they were audible, sounded very metallic.

I decided I wanted to try something not so well recorded or mastered, so I moved on to the 2000 remastering of Van Halen’s 1984 and I played “Jump” from my hard drive encoded at 320kbps AAC. I should mention here that playing files back from the hard drive on the Mini with a Mac consists simply of plugging in the USB 2.0 cable, selecting the Mini in the preferences as the sound output speaker, and using the mode button on the remote to select USB mode (blue light) on the Mini. The Zeppelin Mini played the song back with strong accuracy. The insanely tweaked high frequencies of that remastering were all there and this particular song even extracted some more obvious stereo separation from the Mini. The famous keyboard riff almost sounded like it was floating from somewhere off to the side of the Zeppelin Mini, rather than coming from directly out of it. 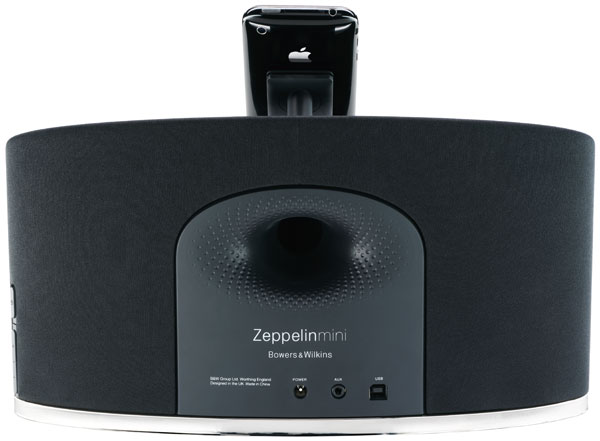 I wanted to listen to something that I knew was a bit bass-heavy to see how the Mini would handle all those low frequencies given its small size, so I selected Björk’s “Hunter” from the Voltaic — Live in the Studio CD encoded at 320kbps and played back from the hard drive. The vocals, again, were very clean and forward, natural sounding, and the Zeppelin Mini presented a solid midrange. The lows were hinted at, more than enough for something of its size, actually, quite impressive for its size, but one certainly shouldn’t expect something resounding.  Turning up the volume to the maximum, surprisingly, did not result in any discernible clipping, but I wouldn’t recommend this.

Turning back to the iPod, I put on Nat King Cole’s “Stardust” in mono from the CD layer of the recent SACD Love is the Thing, encoded at 320kbps. Again, the vocals showed great presence, the Zeppelin Mini maintained the overall warmth of the recording.

Free from the iPod

As a quick test, I pulled out my old portable CD player, blew off the dust, and hooked it up to the Zeppelin Mini’s Aux mini-jack. I put on the Nat King Cole Love is the Thing SACD and played back “Stardust.” The Zeppelin Mini performed just fine in Aux mode and it would be a viable option for those who want to use it for non-Apple mp3 players or to attach their old portable CD players or boomboxes. I personally could not hear any difference in sound quality between playback directly from the iPod or playback over the Aux input from a CD player.

The Zeppelin Mini may just be the iPod speaker to crush all the competition in its category.  It provides clean, relatively flat playback, with a natural sounding midrange and decent low frequencies. If you need something for a kitchen, office, or dorm room, to playback music from your iPod, Mac or PC, this speaker should be at the top of your list.