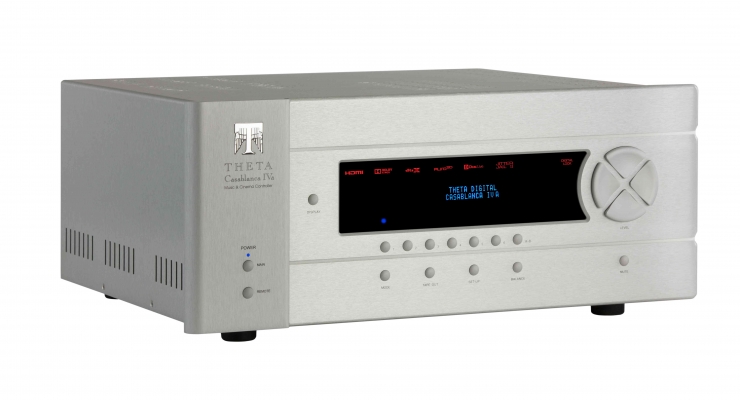 The Theta Digital Casablanca IVA arrives and it may be time to step up my system. Theta Digital has been making Casablanca music and cinema controllers since 1995. This company has also done something remarkable in the audio/video industry by endowing its creations with seemingly eternal life since even the earliest units can be upgraded, at reasonable cost, to the latest model’s specifications. The evolutionary firmware and software changes occur inside the chassis itself, so replacing older DAC and HDMI cards can actually be done in the field if you are not afraid to “pop the top.”

For the past few years, the heart and soul of my home theater has been a Theta Digital Casablanca IV, upgraded to pass 4K Ultra HD sources and handle DTS-HD Master Audio 7.1 and Dolby TrueHD 7.1 soundtracks. However, since object-based sound formats like Dolby Atmos and DTS:X are now appearing regularly in the new streaming content and Blu-ray discs that I review, it was about time to look into the newest addition to the Casablanca family, the CB IVA. Among its most significant updates include a pair of new Texas Instrument processor chips that decode Dolby Atmos and DTS:X soundtracks and deliver true 7.1.4 channel sound. Older 2-channel and standard Dolby and DTS surround formats can be “upmixed” via Dolby Surround or DTS Neural:X, respectively. A new digital topology eliminates the DSP board’s sample rate converter so the Digital Direct mode passes any signals arriving in the digital domain in their native format and channel count. Analog signals are left entirely alone by the Analog Direct mode. The new HDMI card can now pass 4K UHD HDR10 color encoded content through all four inputs. Thanks to the timely assistance of Craig Shumer (Theatermax,LLC), a brand spankin’ new Casablanca IVA landed on my doorstep and opened up the brave new world of immersive sound.

My reference system includes Pass Labs amplifiers (two XA-100.8s, one X-260.8, one X-150.8 and one X-150.5) and a MartinLogan speaker complement of two CLXs in front, an ESL 34a Illusion in the center, two EFXs as surrounds, and a pair of Balanced Force 212 subs. The back surrounds are a pair of Magnepan MGMC-1s. Adding an Amplifiers Technology Inc. AT524NC four-channel amplifier (reviewed separately), and a quartet of Dolby Atmos-enabled MartinLogan Motion AFX speakers did require a brief refresher course in system set up. While I do not like reading manuals any more than the next person, this is one instance where the instructions are essential to setting up the special features that the CB IVA offers.

Like its predecessors, the CB IVA has a neatly laid out façade available in silver or black. On the left there is a logo plate with power LED, and main and remote power buttons. A large, very legible VFD display indicates mode and signal source and also opens up the menu functions during set up. To its immediate left is a display button that overrides the display’s brightness. Below are six source buttons and an A-D button that switches the inputs for each source. Below these buttons are Mode, Tape Out, Set-Up and Balance buttons. Moving to the right of the VFD is a four-element keypad with volume and balance adjustments and that also selects some set up parameters.

The rear panel has a power switch, RS232DB9 and RJ45 connectors, a USB connector for firmware updates, and a power

cord receptacle. Below are a remote power jack and three 12V power jacks. Moving right,  there is a new HDMI card with a single 2.0/HDCP 2.2 output and four HDMI 2.0/HDCP 2.2 inputs. A digital input card has single XLR, four coaxial and four optical inputs, two data volume outputs, and a USB port for Dirac software communication. Moving right again, there is an analog input card with six RCA inputs. Two Extreme D-3 DAC cards can accommodate up to twelve channels and arrive programmed as follows: Card 1: L and R Front, Center, Sub, L and R Surround; Card 2: L and R Rear Surround, L and R Front Height and L and R Rear Height. If you have a pair of subwoofers, they can be yoked to an XLR splitter out of the sub channel to share the common low frequency effect (LFE) signal.

The CB IVA can accommodate up to 19 different devices (9 digital, 6 analog, 4 HDMI). Each of the six inputs displayed on the VFD can be assigned primary, secondary or tertiary sources addressable from the remote control or front panel selector buttons. In turn, the buttons can be labeled with up to four alphanumeric characters assigned by either the remote control or the front panel volume/balance controls.

The speaker configuration menus can adjust crossover points (full or limited range), distance/delays from the listening position, and level adjustments by using the internal signal generator or a Blu-ray calibration disc and a SPL meter. Speaker parameters can be assigned specifically to each input or the same parameters can be assigned to all inputs. A default audio mode can be selected for each input, “DIRECT” being the factory setting that adjusts automatically according to the native resolution of the audio source.

The backlit universal remote control comes pre-programmed for the CB IVA and can also be programmed for a cable box, television set, video player, and other A/V devices. The instruction manual lists codes for numerous manufacturers’ devices and, failing those, the specific remotes can be manually cloned to this unit. I had no difficulty in getting it to handle my most frequently used audio/video devices.

Getting the “Sonic Nasties” out of your Media Room

Dirac Live is the most powerful room “correction” tool available for domestic use. For the sake of succinctness (there is extensive information in the owner’s manual and on the Dirac website, www.dirac.com), the Dirac software is downloaded to a PC that is then connected via USB cables to the supplied calibrated microphone and to the CB IVA. Since the new Dirac set up routine was considerably more challenging than what I had experienced with my older CB IV on a 5.1 system, I contacted Theta Digital tech wizard John Baloff who helped walk us through the new program until every step was done. The most time-consuming part of this process is the generation of an uncorrected frequency response curve for each of the twelve channels that is obtained by moving the microphone to several different listening locations (we used five). The resulting composite curves  can then be manipulated on the PC to yield a final version with the smoothest frequency response (see below). Specific frequency peaks and troughs can be safely removed and the finished curves stored in the CB IVA. These final curves would only need to be changed if the speakers or their positions were changed in the future.

Dirac Live can be turned on and off, permitting before and after comparisons, but once it is in place, you will not be likely to turn it off. In my acoustically treated media room, improvements with Dirac Live were readily apparent across the audible spectrum, literally taking the remaining sonic vagaries of my room out of the sound equation. I noticed that the low frequency response was considerably tighter; the locations of various sound sources in the acoustic field were more precise. Such sonic improvements should be even more dramatic for rooms with the typical audio issues caused by exposed windows, open doorways, hardwood floors or high ceilings. Conscientious audio-video installers or very tech-savvy owners should be able to get the CB IVA up and running, Dirac room correction included, in about three hours.

My Home Theater is Reborn

While I have always considered my home theater system to be pretty darn good, the CB IVA raised the audio bar to an entirely new level. During this review, A/V sources included 2K and 4K Ultra HD Blu-ray discs, Pure Audio Blu-ray Discs, and CDs all played through the Oppo UDP-205. Streaming program material was delivered from an Apple TV 4K,  Roku Premiere+, and NVidia Shield Pro, and broadcast television shows originated from a new 4K-capable Xfinity cable box.

Dealing first with video pass-through, a comparison between a direct HDMI connection to a Sony XBR A1E OLED Bravia display and a HDMI connection to the Theta Casablanca IVA showed flawless transfer of 4K Ultra HD HDR10 images from a Blu-ray Disc library that included Kingsman: The Secret Service, Ex Machina, Prometheus, and Guardians of the Galaxy Vol. 2. Similar observations were made with 4K content streamed from a Roku Premiere+, Nvidia Shield Pro, and Apple TV 4K.

So far, so good, and knowing that the Casablanca is intended primarily to be a sound processor, I was pleased to note how well it handled Dolby Atmos (The Fifth Element) and DTS:X (Ex Machina), soundtracks, placing the special effects from the height speakers above my listening position and shuttling them around the room to create the illusion of palpably real objects in space. Although the height effects varied and were occasionally more subtle, the four small up-firing speakers enhanced the enjoyment of such films and recreated the “in-theater” experience with far better sonics than those available at any of my local movie houses. The upmix mode was applied mostly to television programming that is often lossy two-channel Dolby Digital. While it did not turn The Black List or Blindspot into sound spectaculars, adding spatial dimensions to the soundtracks did make the shows more exciting to watch. One recurrent quirk inherent in the audio/video source handshake is that when the picture first appears, there is a couple of seconds’ delay before the soundtrack enters.

Jan Gunnar Hoff’s album Stories, a Pure Audio Blu-ray disc on the 2L label illustrated how well Dolby Atmos can aid the capture of a solo piano’s overtones and the sonic decays that would be apparent in a concert hall. Himmelsrand, another 2L disc with the Uranienborg Vokalensemble performing a collection of new and traditional hymns, recreated the live experience, recorded in a sonorous church, again with obvious benefits from the additional Dolby Atmos height channels.

Although most home theater enthusiasts will probably consider the Theta Digital Casablanca IVA’s A/V surround sound functions as their first priority, I sampled a number of 2-channel CDs, SACDs and DVD-Rs via the Oppo player. Discs like Patricia Barber’s Modern Cool in both CD and SACD formats and Eiji Oue’s traversal of Stravinsky orchestral pieces with the Minnesota Orchestra (DVD-R) sounded as spectacular as I have ever heard them on my conventional stereo set up with superb rendering of space, instrumental details, and timing. The take home message here is that this preamplifier/processor can more than do justice to your entire music-only library.

The Theta Digital Casablanca IVA has attained the pinnacle of surround sound audio performance. The addition of Dirac Live room correction releases the sonic shackles that bind most rooms, even acoustically treated ones like mine, and moves the music one step closer to what you would get in a well-designed performance venue. While quite expensive (the review unit, as configured, retails for $28K), the Theta Digital Casablanca IVA’s upgradability makes it virtually future-proof. For those willing to foot the bill, the CB IVA will be the last SSP that they will ever need to buy. Highest recommendation.

Theta Digital Casablanca IVA is available in Silver or Black at a MSRP of $27999.