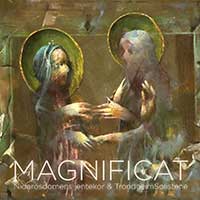 Great classical music is still being written in our new millennium as evidenced by this 2L Records Pure Audio Blu-ray disc. The principal work is the Magnificat of 35 year-old Norwegian-composer Kim André Arnesen.  Scored for a chamber orchestra (Trondhem Soloists), chorus (Nidaros Cathedral Girls’ Choir), soprano soloists (Lise Granden Berg, Cecelie Ertzaas Overrein), piano (Maria Naess), and organ (Magne H. Draagen), this 41-minute long work is a continuous outpouring of sublime inspiration that will move many listeners to tears. While Magnificat has echoes of John Rutter and Eric Whitacre, Arnesen truly possesses his own musical style that, in this work, occasionally hearkens back to the ancient era of plainchant. Magnificat recalls Mary’s visitation by the angel Gabriel who tells her that she will be mother of the Son of God. The composer states that “I tried to express what a young, poor woman must have felt on receiving such a message: wonder, devotion, gratitude, joy, humility, hope and compassion.” The emotional core of Magnificat occurs in the Et misericordia as soprano Berg soars above the chorus and orchestra. The entire playlist follows below:

Musica Celestia, heavenly music as sung by the angels in praise of God, is American composer Aaron Jay Kernis’s adaptation of the slow movement from his String Quartet No.1. Its twelve minutes move gradually through a number of variations framed by its introduction and coda. Similar in mood to the preceding piece on this program, listeners will receive a contemplative, yet uplifting musical message from the massed strings of the Trondheim Soloists. 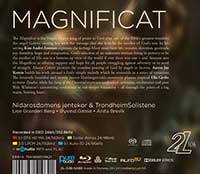 The well-known Norwegian composer Ola Gielo (Piano Improvisations) has set poems by Charles Anthony Silvestri, Tundra, and Walt Whitman, Song of the Universal, scores for piano (Gielo), orchestra, chorus, and solo soprano (Else Bonesronning). These two expressionistic pieces perfectly complement the previous program numbers in both mood and sheer beauty of their music.

As is now the case for all 2L recordings, this Pure Audio Blu-ray was recorded in DXD audio (352.8kHz/24-bit), mixed down to a 5.1 DTS-HD Master Audio or 2-channel LPCM (both at 192kHz/24-bit resolution). The Auro-3D 9.1 (96kHz/24-bit) version was down-res’d by my surround-sound processor to DTS-HD Master Audio 5.1. All of these audio options were superb with my nod going to native 5.1 (192k/24b). The Nidaros Cathedral appears to have stunning acoustics and we are treated to just the right amount of post-echo and sonic decay in both surround versions. Illustrations of the seating charts and microphone placement are shown in the program booklet.

Always generous with its supplements, 2L includes a high-resolution hybrid multi-channel SACD and mShuttle downloads in MP3 and FLAC formats. The program booklet lists program tracks, performing and production credits, and nice background essays on the works and their composers. Filling out the extras is a brief (5:36) high-definition video of the Et Misericordia recording session, also available in the same three audio versions as the complete program. We see the placement of the piano and organ behind the conductor and the soprano (Berg) perched on a three-foot high stand (for the height-effect channels).

This is one of the very best “new music” discs that I have heard in a long time and one most deserving of its 2016 Grammy nomination. Sublime and spiritual music, beautifully realized and recorded, makes Magnificat a must-have Blu-ray that readily merits my highest level of recommendation.