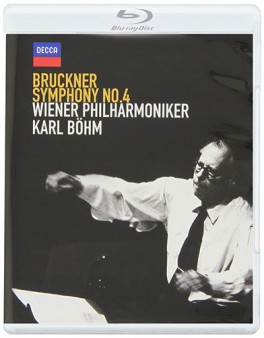 Anton Bruckner’s Symphony No. 4, also known as the “Romantic,” was his breakthrough symphonic work and launched a series of several mature-era symphonies that were noteworthy for their length and extensive use of massive walls of sound, bolstered by huge brass chorales. Three of this symphony’s four movements carry the instruction “Bewegt” or, in musical terms, “animated.” It is important that this instruction is heeded to maintain the vital pulse of these long movements.

Maestro Karl Böhm, one of the early 20th century champions of Bruckner’s work, had a long performing history with the Vienna Philharmonic, a premier exponent of this composer’s symphonies. This 1973 recording represents the culmination of a career-long collaboration between this conductor and his players. The pacing and dynamics are the best that I have ever heard (and I have heard many recordings of this now-popular symphony). Throughout, one continually gets the sense that Böhm understood the composer’s intentions and made every effort to deliver them with a loving yet firm hand.

Another Vienna Sofiensaal studio recording triumph with excellent orchestral balances, spacious soundstage and analog warmth.  The three high-resolution versions were very similar and all would be most satisfying to any listener. Frankly, I had difficulty in consistently telling them apart although, on repeated A/B/C comparisons I found myself selecting the PCM version most often. As I have done in the past, I put the Blu-ray up against the LP set that I have had for four decades. Some surface noise aside, the vinyl discs were slightly warmer and more open (not that the Blu-ray Disc was lacking in these properties).

Universal Music (Decca) gives us a fold-out brochure with liner notes on the conductor, the composer, and this work.

It is beginning to seem a lot like Christmas from the Universal Music folks with reissues of performances like this one that have been lovingly remastered.  As in some of the other High Fidelity Pure Audio Blu-rays that have come my way, this Bruckner Fourth Symphony may be the best overall rendition of the modern era, thanks to the superb collaboration between the VPO and maestro Böhm. In the Blu-ray world, it seems to be raining Bruckner as I have had three other audio/video Blu-ray versions to review from conductors Franz Welser-Möst, Daniel Barenboim and Christian Thielemann, and their respective orchestras. While the addition of sight to sound would seem advantageous to some listeners, orchestral music does not necessarily need to be constantly in front of our eyes. As matters currently stand, I would put this 2-channel audio-only disc at the top of my Bruckner 4 Blu-ray list as this performance has been since I bought the LPs 41 years ago. Another highly recommended Pure Audio release from UMC.