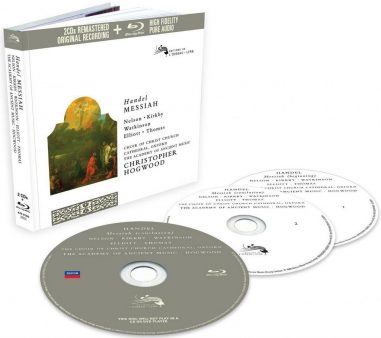 Handel’s Messiah has been one of my go-to choral works for as long as I can remember. Of the numerous versions of this oratorio that I own, my first purchase was the legendary 1966  Sir Colin Davis/London Symphony Orchestra version (on vinyl) that, for years, has provided the benchmark for all Messiah recordings. I had the pleasure of reviewing the Pure Audio Blu-ray premiere of this Messiah last year and was stunned by how well the nearly 50 year-old mastertapes were resuscitated by the remastering crew. However, Messiah authenticity purists will note that the version used in that recording was an amalgamation of several sources rather than an original performing score.

The Davis/LSO recording was followed by a flood of new discs with modern instruments and large choruses. This all changed in 1979 when the late Christopher Hogwood took his smallish Academy of Ancient Music band (playing authentic instruments) and an accomplished group of soloists, sopranos Judith Nelson and Emma Kirkby, contralto Carolyn Watkinson, tenor Paul Elliott, and bass David Thomas into the St.Jude-on-the-Hill parish church on the outskirts of London. These forces were joined by members of the Choir of Christ Church Cathedral (Oxford) under the direction of Simon Preston for this recording. Unlike its predecessors, this Messiah was painstakingly prepared from the performing version given by Handel himself at the Foundling Hospital in 1754. When these vinyl records were released in 1980, this set was hailed as “one of the most important recording events of the late 20th century” and one of the best ever released.

The genius of this recording is not only Hogwood’s musicianship, evident in abundance, but the meticulous balance of soloists who shun showy virtuosity in favor of purity of vocal line. The chorus is also very much reduced in size and includes boy trebles, resulting in a sound that Handel would have likely heard in his performances.  In comparison to the aforementioned Davis/LSO recording, conductor Hogwood goes for even brisker but not rushed tempi, giving this Messiah an uplifting “bounce.” As noted in the superb program booklet, there are some differences in this performing version likely to be noticed only by those cognoscenti with intimate knowledge of the “standard” versions. One of the most noteworthy of these differences is the assignment of the solo “But who may abide the day of his coming,” to the second soprano, Emma Kirkby, who went on to establish a legendary career in the early music repertory.

In comparison with the original CD set in my library, this Pure Audio disc is simply better in every conceivable way. The dynamic range is broader, the soundstage is deeper, and the voices receive warmth that was simply lacking on the red book CDs. Small orchestral details emerge with a clarity that was less audible on the CDs. This set also contains a pair of remastered CD that probably used the same 96kHz/24-bit masters although this is not specified in the program booklets. While not the equal of the Blu-ray Disc, these CDs are a vast improvement over the originals. Regarding the Pure Audio formats, there was little noticeable difference in sound quality between the LPCM 96kHz/24-bit and the Dolby TrueHD versions.

The booklet alone is worth the premium price for this three-disc set. Besides a reappraisal of this recording by Lindsay Kemp and a performance history and comparison with the present version by Anthony Hicks, there are detailed notes by Christopher Hogwood.  The three-language libretto and cast and production credits are also included. Of course, I would consider the CDs to constitute substantial bonus material.

This Messiah is not a dramatic heavens-shaking version but rather a more delicate, intimate affair that would have been much closer to what the composer would have favored in his day. As such, it gives listeners a taste of what Handel’s audiences would have heard. Rather than replacing my beloved Davis “modern” Messiah, it would go along side of it, as a worthy alternative. Those who love this iconic work will surely spring for more than one recording and the Hogwood/Academy of Ancient Music version justifies the hype that it received three decades ago. Highly recommended.