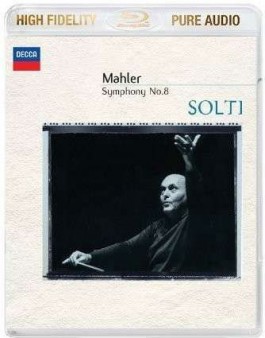 I had heard previous recordings of Gustav Mahler’s titanic Symphony No. 8, but I had a near out-of-body experience while listening to a 1971 Decca LP set, taped in Vienna’s Sofiensaal, with the Chicago Symphony Orchestra led by its legendary maestro Sir Georg Solti and featuring strong vocal soloists and great choruses. This recording later appeared as a Dolby-B reel-to-reel tape, and more recently as a Red Book CD (remastered from a 96kHz/24-bit source). Now, in 2014, we are treated to a High Fidelity Pure Audio Blu-ray, the subject of this current review.

Nicknamed “Symphony of a Thousand” after the huge instrumental and vocal forces required by this score, the Mahler Symphony No. 8 has been often regarded as the ultimate choral symphony. It was first performed in 1910, the last full year of the composer’s life. There are two contrasting sections, opening with a relatively short Latin hymn “Veni, creator spiritus” and closing with the extended final scene of Goethe’s Faust. These two parts are linked by the theme of redemption through love, a theme that should be familiar to fans of Wagner’s Ring of the Nibelungen operatic cycle.

With eight principal soloists, in this case sopranos Heather Harper, Lucia Popp, Arleen Auger, altos Yvonne Minton and Heather Watts, tenor Rene Kollo, baritone John Shirley-Quirk, and bass Martti Talvela, as well Viennese choruses, there is no shortage of vocal fire power on stage. The performers are further stoked to a proverbial white-heat state by the often-frenetic baton of conductor Solti, making this performance one that will keep listeners on the edges of their respective seats throughout.

The High Fidelity Pure Audio high-resolution disc format splits the audio and video signals, leaving the dedicated on-board DAC to focus solely on the music. Taking the video circuit out of the equation leaves us with as pristine a rendition of this soundtrack as we are likely to get. There are three different audio codecs, all in 96kHz/24-bit resolution, to choose from: Dolby TrueHD, DTS-HD Master Audio and LPCM. Do any of these new versions improve a 40+ year-old 2-channel analog recording? The answer is mostly yes, particularly when put side-by-side with the most recent CD version that, good as it is, has to be considered out of the running in this instance. I have all of the Solti/CSO’s previous sound incarnations of the Mahler 8th and, for this review, I put my treasured Decca (early stamper) LPs up against the new Blu-ray. Both DTS-HD Master Audio and Dolby TrueHD brought out the many palpable bass passages and the organ fortissimos in Part I and Part II as well as did the LP version (of course with quieter surfaces). I preferred either of these lossless formats to the uncompressed LPCM alternative, but choosing between them was tricky and not always consistent. Where I thought that the LP gained some (albeit modest) ascendancy was in its greater warmth for the many vocal parts in this piece. This is best exemplified in the final two tracks (15/16) where Doctor Marianus (Kollo) and the Mystic Choir track the ascent of Faust’s soul, led on by “das Ewig-Weibliche” (the Eternal Feminine).

There is a multi-language program booklet that presents Michael Kennedy’s original liner notes, track and personnel listings, a libretto, and some washed-out recording session photos.

Universal Music rolled out its High Fidelity Pure Audio remasters with some of the best-regarded classical recordings from its extensive archive of the Decca, DGG, and Philips labels. I was quite pleased that UMe chose this particular release as one of the first offerings in this series as it truly benefits from this newer audio format. While the recording industry has moved on considerably since 1971, this was one whale of a performance then and remains so to this day. By contrast, there is a surround-sound Blu-ray Audio version that I reviewed three years ago with Polish maestro Antoni Wit leading lesser-known soloists and the choral and orchestral forces of the Warsaw Philharmonic Symphony Orchestra.  This performance is considerably more restrained yet deeply moving in its own right, the antipodes of the Solti approach. While the vocal nod must go to the Solti/CSO HFPA reissue, I would not want to be without either version, as each brings different interpretative strengths to this towering work. For those wishing to take the ultimate step of adding sight to sound, the Ricardo Chailly/Leipzig Gewandhaus Blu-ray is a top choice, and complementary rather than superior to the two audio-only discs in its performance aspects.