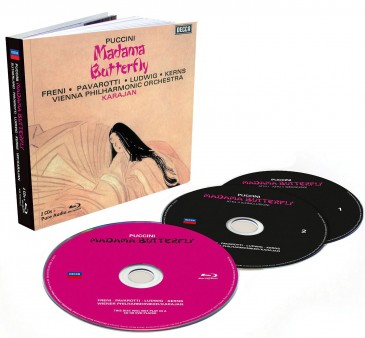 Christmas came early to my household as the Decca studios dropped off  some classic opera recordings starring the incomparable tenor Luciano Pavarotti. I started my reviews with Puccini’s heartbreaker, Madama Butterfly, in which Pavarotti, playing the rakish American naval officer Lieutenant B.F. Pinkerton, is partnered with his longstanding colleague and fellow Modena, Italy native, soprano Mirella Freni as the title role’s naïve Geisha. To make matters even more magnificent, this 1974 Decca recording has one of the world’s greatest opera orchestras, the Vienna Philharmonic, under the guidance of no less than Herbert von Karajan.

Madama Butterfly opens with Pinkerton and the American ambassador to Japan, Sharpless (Robert Kerns), toasting the Lieutenant’s impending nuptials to the beautiful 15-year old Japanese girl who has given herself to a man she scarcely knows. At the wedding, Butterfly’s family renounces her, and, soon, Pinkerton ships back to the United States, promising to return one day. Later, we find out that Butterfly has borne his son. Pinkerton has been gone for several years, but Madama B. is certain that he will come back to her. Faithful servant Suzuki (Christa Ludwig) tries to comfort Butterfly.  An American ship is spotted in the harbor of Nagasaki and Pinkerton has returned but with his “real” American wife Kate to collect his son. Butterfly agrees to giving up her son but on the condition that the Lieutenant himself visit her. Madama Butterfly contemplates suicide: “Con onor muore chi non puo serbar vita con onore” (He dies with honor who can no longer live with honor). As Pinkerton arrives, Butterfly commits ritual hara-kiri with her father’s sword.

Given this opera’s immense popularity, Madama Butterfly has received dozens of recordings. While it is challenging to pick and choose among them but the superb vocalism and pathos of this one, coupled with von Karajan’s unerring leadership, puts it at the absolute top of them all.

I have owned this recording since its initial release on vinyl, followed by the CD version, and now the Blu-ray Pure Audio release. Making no excuses, the sonic character of the 1970s Decca recordings underwent a significant change, highlighting brilliance often at the expense of the warmth that characterized their early “FFSS” (Full Frequency Stereophonic Sound) releases. This reissue gives us a spacious soundstage, bold brass and voices a bit less prominent than in the many opera recordings of that era. That said, the Dolby TrueHD 2.0 version is as good as I have heard this 40-year old recording ever sound with much of its original brightness successfully reined in.

Those who have not owned the CD incarnation of this work, released in 1987, will also get a much improved two-disc set. The deluxe packaging includes a complete libretto (that is actually legible), along with cast and recording credits,a synopsis and  background essays on the opera and Luciano Pavarotti.

Lovers of Madama Butterfly will surely own more than one recording (I own seventeen!). This particular one has had a soft spot in my heart for four decades. Shortly after its release, my daughter was born, and I had tickets to Pavarotti’s Chicago debut recital.  After the concert, I went backstage for autographs, armed with a Polaroid picture of my brand-new child. Showing it to the then-young tenor, Luciano responded with “Che bella bambina” (what a beautiful little girl), and from that very moment on, I became his fan for life. This Madama Butterfly has all of the vocal virtues that Luciano Pavarotti brought to his many roles with a cast and conductor that would be impossible to duplicate in our present times. The coupling of Pavarotti and Freni is a match made in heaven and this is exactly what we get. The labeling of this box explicitly states that is a limited edition. Run, do not walk, and just get it. This Butterfly will get you to opera heaven without your having to die to get there.