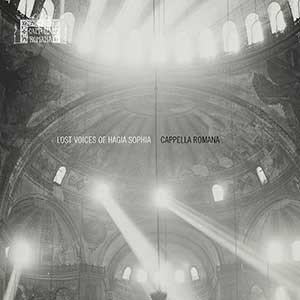 Hagia Sophia (Holy Wisdom) is an iconic house of worship built nearly 1500 years ago and was the largest church in the Byzantine Empire. Since then it has been repurposed as a mosque when the Empire’s capital, Constantinople, fell to the Ottomans in 1453. In 1935, the Turkish government converted Hagia Sophia to a museum, and its interior was made off-limits for any vocal performance, hence the “lost voices”  of the title.  In July 2020, Turkish President Recep Tayyip Erdogan reclassified Hagia Sophia as a mosque which makes this recording all the more valuable as an audio document.

Lost Voices began as a project of Stanford University’s Icon of Sound team that included Professor Bissera V. Pentcheva, Jonathan S. Abel Adjunct Professor at the Center for Computer Research in Music and Acoustics (CCRMA) in the Department of Music, and Alexander Lingas, Music Director and Founder of Capella Romana, a Portland, Oregon-based choral group that specializes in performing early and contemporary music of the Christian East and West.

In 2010, the Lost Voices project team visited Hagia Sophia and began mapping its sound-field with reverberations that exceeded 11 seconds. They applied auralization to these measurements to create a virtual replica of acoustics under Hagia Sophia’s great dome. The following program is titled The Feast of the Exaltation of the Holy Cross in Constantinople and consists of a sequence of Greek chants that would have been heard in the Eastern Orthodox liturgy more than a millennium ago.

From the Office of Sung Vespers

From the Office of Sung Matins

From the Ceremony of the Exaltation of the Holy Cross

Selections from the Divine Liturgy

Applying Professor Abel’s sound technology to the fifteen voices of Capella Romana creates an audio experience that few if any listeners will have ever heard. These disembodied voices, evoking the holy spirit of God, seem to come from everywhere and totally envelop the audience.

Cutting to the chase, either of the two object-based soundtracks, Dolby Atmos (the one that I chose) or Auro-3D, would be the way to go with their overwhelming reconstruction of a huge acoustic space. An atmospheric Red Book CD is included in this set but is no match for the Blu-ray disc. The soundtrack and program booklet can also be transferred to a computer from a disc player via the mShuttle program.

Put this Blu-ray Disc in your player, and push the Pure Audio button (if it has one). In short order, you will be transported to a literal and figurative audio heaven. Lost Voices of Hagia Sophia also will take you on a moving spiritual journey that will stay with you long after the final echoes have receded into the distance. Discs like this one that combines the very best in performance with the very best in sound are a rare source of revelation and will surely become a favorite demonstration disc at the annual audio/video trade shows. Highest recommendation. 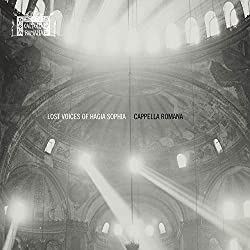