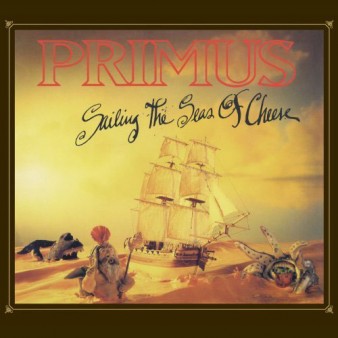 In 1991, Primus exploded onto the hard rock scene with their second studio album and major label debut Sailing the Seas of Cheese. Spawning three singles, “Jerry was a Race Car Driver,” Tommy the Cat” and “Those Damned Blue-Collar Tweekers,” Seas of Cheese would go on to influence numerous outfits in the rock arena and propel the ensemble onto tours in support of acts as disparate as Public Enemy, Rush and U2.

The slap-bass of frontman Les Claypool, the driving, distorted guitars of Larry LaLonde and the thumping, precision stick work of Tim “Herb” Alexander converged with the band’s overriding quirky sense of humor to create a perplexing musical style that defied categorization. Was it hard rock? Was it heavy metal? Alternative? Funk rock? Progressive? It was and is all of them. They reached back through all of their influences and came up with a punch you in the jaw and laugh while they were doing it style of playing that reminds one of Rush, The Who and Pink Floyd, and with the frat boy humor and tongue in cheek sarcasm, evokes the best of Funkadelic and Frank Zappa.

Sailing the Seas of Cheese, now hitting its 22nd anniversary, hasn’t aged a bit, and songs like “Tommy the Cat” with its spoken verse or “American Life” with its melodic, Flea-like bass line, sounds like it could have been laid down by an up and coming band only yesterday.

Perhaps no other album in their catalogue quite balanced their sense of humor and their ballsiness as well as this second studio effort, and this Deluxe Edition, including new live and rare materials,  and new 2013 remix of the entire album by Les Claypool, is a fantastic way to experience it.

Musical purists may scoff at remixing an album that has reached a level of classic status, or any album for that matter, and I’m usually one who falls into that camp. I have to admit, however, that this new 2013 remix of Sailing the Seas of Cheese, overseen by Les Claypool himself and offered up by Interscope a high-resolution lossless 96kHz/24-bit LPCM 2.0 version on Blu-ray Audio Disc (and on CD) breathes new life into this album. Seas of Cheese has punch, low end, and airy highs that it never had before. In fact, it finally sounds as “ballsy” as this sort of music should have sounded the first time around. Not only do Claypool’s slap-bass lines pound you in the face, but Tim “Herb” Alexander’s kick drum kicks you in the gut. Thankfully, the recording still has some dynamics and doesn’t seem to have been squeezed to death either, and the high frequencies sound smooth, not fatiguing. There’s strong stereo separation, such as on tracks like “American Life,” where you can really hear the drum fills move across the stereo field or Claypool’s distorted vocal talking track move way off to the far left. Again, I don’t know if purists will dig this new updated mix, but for me, this is one of the rare occasions where going back and redoing it has actually resulted in an improvement.

Despite being labelled as such, the 5.1 versions of Sailing the Seas of Cheese are not in 96kHz/24-bit, and thus the delay in this review going live. We are awaiting word from our contact at Dolby and the folks from Primus about this issue, as the release had been touted to be fully high-res, 96/24. At this time, we have still not heard anything back from anyone, so we can’t say if this is a mastering/authoring error, or as intended. With that being said, the surround mix at 48kHz/24-bit still sounds sublime, if just a little less natural than the 2.0. The extra channels and spaciousness more than compensate for this.

The mix makes great use of all the channels, bringing the surround channels into play at the right moments, such as in “Sgt. Baker” where the “right/left” background vocals ring in the surround left and right channels, although if they actually pinged left and right, it would have been even better, or the first guitar solo in the same track being panned circularly through the room. The dreamy “American Life” makes use of the atmosphere of the song and takes Claypool’s “liberty” in the first verse “Statue of Liberty” phrase and pings it back and forth between the left/right surround channels (liberty-liberty-liberty) from surround left to surround right and back again.

Always, in this mix, Claypool’s vocals ring out with great clarity, and the drums smack with authoritative punch and the bass thwacks with buzz and fatness. It’s an absolutely sublime experience and a great new way to experience this classic rock record for fans of the surround experience.

Because this is a Blu-ray Audio Disc, we get a little bit extra in the way of a visualizer and some very surreal video clips that thematically align with each track. There are also on-disc liner notes and a booklet with the same liner notes. Also included in the CD with the new stereo remix of Sailing the Seas of Cheese by Les Claypool.

Sailing the Seas of Cheese may be over twenty-years old, but in this new Deluxe Edition Blu-ray Audio+CD edition, the music sounds alive in whole new ways. The 5.1 mix, in particular, breathes new life into an already sublime rock classic, but the new stereo mix also makes it more ballsy than ever. So, “sit back and have a cup a joe” and enjoy this rock classic. It’s one of the must-own releases of the 90s.