Paramount has announced they will be bringing the award winning documentary Waiting for “Superman” to Blu-ray, DVD, and VOD on February 15, 2011. The Blu-ray will be available at a suggested retail price $29.99 and will feature a 1080p widescreen encoding with English, English SDH, French, Brazilian Portuguese, and Spanish subtitles. 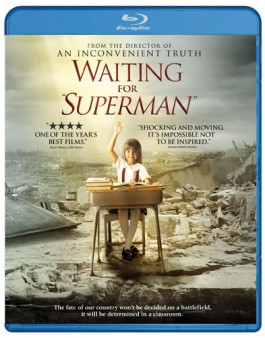 Special features are all in HD and include:

Additionally, as part of an effort to assist viewers in finding a way to make a difference in public schools across the country, DonorsChoose.org will give consumers a $25 credit for each Waiting for ”Superman” Blu-ray or DVD purchase that can be donated to any classroom project listed on DonorsChoose.org.  This generous donation exceeds the expected retail price of the DVD.  Consumers simply visit the website, select a project and then enter their unique code to make the donation.

Named the Best Documentary of the year by the National Board of Review, and cited by the American Film Institute as one of the year’s best movies, Waiting for “Superman” was called “an electrifying call to action” (Peter Travers, Rolling Stone), and has launched a movement to achieve real and lasting change in the nation’s schools.  The film depicts the moving and poignant struggles of real-life students and their families and the efforts of educators and reformers who are working to find viable solutions within a dysfunctional system.