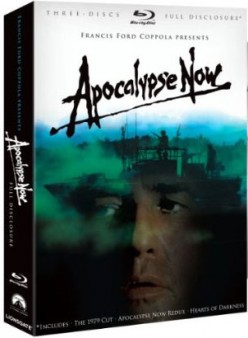 Both Blu-ray versions contain Apocalypse Now – The 1979 Cut and Apocalypse Now Redux with more than nine hours of bonus material including new interviews with on-screen and behind-the-scenes talent.

The 3-Disc Full Disclosure Edition will also include the making-of feature documentary Hearts of Darkness: A Filmmaker’s Apocalypse as well as additional new bonus features. In addition, this version features a 48-page collectible booklet with a special note from Francis Ford Coppola, never-before-seen archives from the set, behind the scenes photos and more. The Full Disclosure Edition comes packaged in a keepsake case featuring archival poster images designed by Japanese artist Eiko Ishioka.