In another of the BFI‘s Dual Format Editions (Blu-ray+DVD), Luis Buñuel and Salvador Dalí’s controversial collaborative film, L’Age d’or will see its release on 30 May, 2011 at an RRP of £19.99. 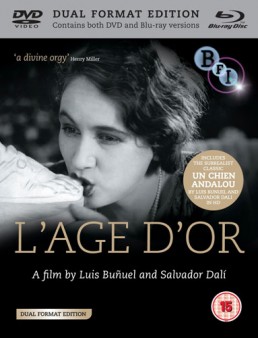 Special features will be:

Even now, more than 80 years since it was made, this uniquely savage blend of visual poetry and social commentary remains as brilliantly witty and shocking as ever. A sinister yet poignant chronicle of a couple’s struggle to consummate their frenzied desire in the face of a stream of obstacles, in the form of bourgeois society and the Church, the film was banned and vilified for many years for its subversive eroticism and furious dissection of ‘civilised’ values.

Extras include a new HD transfer of the 1960 restoration of Un Chien Andalou, Buñuel and Dalí’s provocative debut which created a scandal at its premiere. Presented here with the restoration score, based on Buñuel’s notes, the BFI has also commissioned musicmakers Mordant Music (who re-scored an array of 70s and 80s public information films and documentary shorts produced by the Central Office of Information (COI) last year for the startling BFI DVD release MisinforMation) to create an alternative soundtrack option, which is premiered on this release.

In addition to Robert Short’s fascinating filmed introduction and audio commentaries for both L’Age d’or and Un Chien Andalou, this comprehensive release is completed by A Propósito de Buñuel – a feature-length documentary on the life and work of Luis Buñuel, by José Luis López-Linares and Javier Rioyo.