BFI Flipside Bringing Voice Over to Blu-ray/DVD in October

The BFI will be adding another title to their Flipside imprint with the release of Voice Over in a Dual Format Edition (Blu-ray + DVD) on 22 October 2011 at an RRP of £19.99. 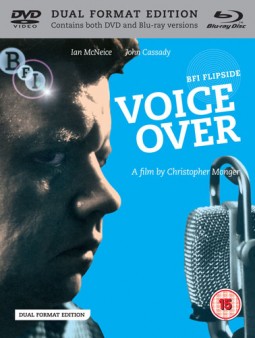 BFI Flipside presents
Voice Over
A film by Christopher Monger Starring Ian McNeice
Unseen for decades, Christopher Monger’s controversial feature Voice Over is released by BFI Flipside in a new HD transfer, mastered from the only surviving print elements. Released in a Dual Format Edition (DVD & Blu- ray discs together), it also contains Monger’s rare experimental feature-length thriller, Repeater.
‘Fats’ Bannerman is enjoying success as the writer and presenter of Thus Engaged, a romantic radio serial about the lives and loves of a Regency heroine. But when grim reality violently intrudes into Fats’ life, his frail fantasies become unbalanced and his ability to separate fact from fiction breaks down, with devastating consequences.
Featuring a compelling central performance from the great British screen actor Ian McNeice (A Life Less Ordinary; Oliver Twist; Doctor Who), this controversial early film from the award-winning Hollywood filmmaker Christopher Monger (The Englishman Who Went Up a Hill But Came Down a Mountain and writer of the multi-award winning HBO production Temple Grandin, starring Claire Danes) caused a sensation upon its original release, when its subject matter was attacked by feminist groups.

Both films presented in High Definition and Standard Definition

Join the discussion on Our Forum