Boondock Saints Gets Truth & Justice Edition on Blu-ray in June

20th Century Fox has announced the upcoming release of The Boondock Saints: Truth & Justice Edition on Blu-ray, set to arrive June 14th with an SRP of $29.99. The release will feature both the Theatrical & Director’s Cut of the film in 2.35:1 1080p high-definition transfers with DTS-HD Master Audio 5.1 sound and English and Spanish subtitles. See the press release below for further information.

The souls of the wicked shall be purified by blood—but only at the hands of two notorious vigilante brothers whose killing spree is a mission from God. The cult phenomenon THE BOONDOCK SAINTS: Truth & Justice Edition arrives on Blu-ray June 14th from Twentieth Century Fox Home Entertainment. Just in time for Father’s Day, THE BOONDOCK SAINTS: Truth & Justice Edition contains both the R-rated and unrated director’s cut with digital copy for the first time and an all-new, never-before-seen bonus feature that pulls you even deeper into the gritty, action-packed Boondock’s world. 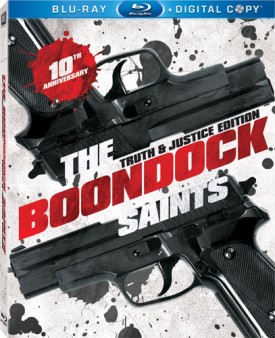 When a series of mysterious murders occur in Boston, the police begin to suspect that the deaths are vigilante killings perpetrated by twins Connor (Sean Patrick Flannery, To Live and Die) and Murphy (Norman Reedus, American Gangster) MacManus. Pursued by FBI Special Agent Paul Smecker (Willem Dafoe, Spider-Man 3), the devout Irish Catholic duo maintain innocence while wreaking havoc on the town dispensing their own brand of justice—a perverse, religious mission to rid Boston of all evil men. After enlisting the help of their friend Rocco (David Della Rocco, The Boondock Saints: All Saints Day), the brothers set out to hunt down every mobster and vicious criminal with unusual flair and dramatic style: by praying for each victim before the ensuing bloodbath. The Russian mob hires a hitman, the infamous ‘Il Duce’ (Billy Connolly, X-Files, I Want to Believe), to avenge the deaths of their comrades. However, the showdown between the MacManus twins and Il Duce ultimately leads to a shocking and unbelievable climax.

THE BOONDOCK SAINTS: Truth & Justice Edition will be available on 2-Disc Blu-ray and Digital Copy in the U.S. only. Pre-book is May 4.