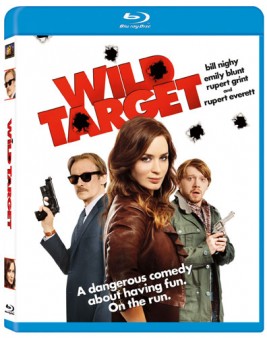 The Blu-ray will feature a widescreen high definition transfer with a DTS-HD Master Audio 5.1 soundtrack and English SDH, Spanish subtitles. It will be a barebones release, on 1-Disc Blu-ray and 1-Disc DVD with the only special feature being the featurette, On Target with Emily Blunt.

The release will apparently be

From director Jonathan Lynn (The Whole Nine Yards) comes this lively British remake of the 1993 French hit “Cible Emouvante.”  Victor Maynard (Nighy) is a middle-aged, solitary assassin whose professional routine is interrupted when he falls for his intended hit, Rose (Blunt). When he spares Rose’s life, Victor inadvertently acquires a young apprentice, Tony (Grint). Believing Victor to be a private detective, his two new companions tag along, while he attempts to thwart the murderous intentions of his unhappy client, resulting in comedic mayhem.