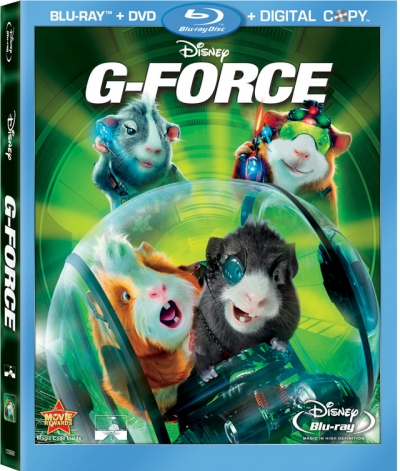 A top-secret, highly trained trio of guinea pig super spies is assigned to stop a dastardly plot to take over the world in G-Force, a gorgeously rendered CGI adventure from famed producer Jerry Bruckheimer. Squad leader Darwin (voiced by Sam Rockwell) will do what it takes to guarantee the success of his team, which also includes Blaster (Tracy Morgan), an outrageous weapons expert with tons of attitude, and Juarez (Penelope Cruz), gorgeous martial arts pro. With the help of Speckles (Nicolas Cage), a star-nosed mole, and myriad other members of the animal kingdom, the G-Force tries to derail evil appliance mogul Leonard Saber’s power grab. It helps when your fly-on-the wall reconnaissance expert is, well, a fly on the wall!Destined to be the family comedy hit of the season, and released just in time for the holidays, G-Force includes a fascinating line-up of behind-the-scenes features, hilarious deleted movie scenes and a collection of music videos featuring songs from the film.  And exclusively for Blu-ray owners, there are three CGI effect bonus features that will satisfy their quest to join the rodent spy world.