Walt Disney Studios Home Entertainment has announced today that on August 18th, 2009 they will release Hannah Montana: The Movie on  Blu-ray Disc day-and date with the DVD.The BD (Blu-ray Disc) will come in a three-disc combo pack featuring the high defininition Blu-ray Disc, a standard definition DVD, and a disc containing DisneyFile™ digital copy which can be transferred to a number of portable devices. The high definition combo pack will retail at a suggested retail price of $44.99 (US) and $51.99 (CAN).

In the Miley Cyrus vehicle, the Disney Channel star brings her alter ego to the big screen.  The film extends the basic premise of the Disney Channels series to a larger production as Miley Stewart’s (Miley Cyrus) complicated life as both a normal teen and teen pop sensation Hannah Montana is taking a toll on her and her family. So Miley’s father, Robby Ray Stewart ( Played by Miley’s real-life father, Billy Ray Cyrus) decides a visit to the family farm in Tennessee to celebrate Grandma Ruby’s (Margo Martindale) birthday will bring his little girl back down to earth. There Miley reconnects with childhood friend Travis (Lucas Till) and romance begins to bloom as Miley is finally able to settle down away from the stresses of her pop star life — that is until her publicist (Vanessa Williams) comes calling and a  reporter (Peter Gunn) tries to dig up the dirt on Hannah.

Walt Disney Studios’ Hannah Montana The Movie Blu-ray Disc release will feature an industry first for interactive Blu-ray Disc technology as Disney continues their trend of pushing the boundaries of Blu-ray’s superior capacity, bandwidth and interactive capabilities. The Blu-ray offers an interactive experience that allows viewers to create a wish list of items displayed in the film and transfer selected items to the internet via BD-Live. In “Hannah’s Country Store” viewers can click on the products in  the movie, obtain information about each product, and purchase the merchandise.  Also available is BD Radio Disney allowing fans to stream Radio Disney live audio through their  home entertainment system, complete with artist and song information and lyrics. Users can also quickly link to a site offering their favorite songs for purchase. 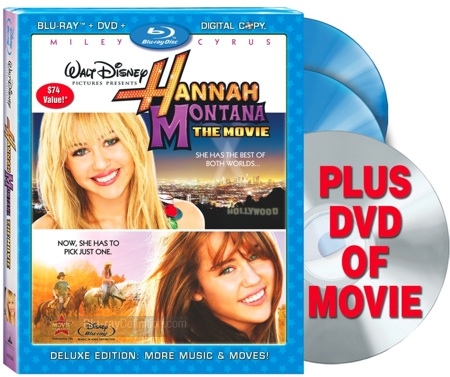 • The HoeDown ThrowDown Home Experience – everyone in the movie has to learn
to do it, and now you can too.  Famed choreographer Jamal Sims and some of our cast
members will show us all step by step how to do the dance everyone is talking about.
• The Hannah Montana Store – an interactive experience that allows viewers to create
a wish list of items displayed in the film and move desired items onto the internet via
BD-Live capabilities.  Through “Hannah’s Country Store” viewers will be able to click on
the products in the movie, obtain information about the product, and purchase the
merchandise.
• 7 Music Videos
• Find Your Way Back Home – Miley, Emily, Billy Ray, and other cast members share
with us “THEIR” hometowns: the people, places & things that make ‘em special. We’ll
go to a pottery class with Miley & her sister, visit their favorite ice cream shop, and
other haunts around the Franklin Tennessee Town Square. Billy Ray saddles up his
iron horse to show us home viewers a firsthand account of the beauty a country town
like Thompson’s Station Tennessee has to offer. But not everyone is from a small
country town. Emily will show us what it’s like to grow up in the entertainment Mecca
we like to call Hollywood. Perhaps it will inspire us all to find a little reason to brag of
our own hailing?
• Production 101: Jackson Style – Jason Earles is more than Miley’s big brother on TV.
He is quite the accomplished actor. Here he will put his talents to use by interviewing
cast & crew and giving us a true behind the scenes look at how this movie was made.
He’ll cover the fashion, the music, the stars, lights, camera…action!
• Bloopers
• Deleted Scenes with Director Commentary
• BD Radio Disney – Fans can stream live Radio Disney audio through their home
entertainment system, complete with artist and song information and lyrics! Users can
also quickly link to site offering their favorite songs for purchase.

Both the Three-Disc Blu-ray Combo Pack and Two-Disc DVD will feature the the following bonus
features:
• New Music Video
• Find Your Way Back Home
• Production 101: Jackson Style
• Bloopers
• Deleted Scenes with Director Commentary
Full technical specs are not known at this time, but viewers can expect a 1.85:1 framing in Disney’s usual AVC/MPEG-4 high definition video transfer and a lossless surround mix.