Entertainment One will be bringing the British World War II thriller Glorious 39 to Blu-ray and DVD on February 13, 2011 at a suggested retail price of $24.98. The Blu-ray will feature a 2.35:1 1080p high definition transfer with English DTS-HD Master Audio 5.1 soundtrack, English SDH subtitles, and a behind-the-scenes featurette and interviews as extras. 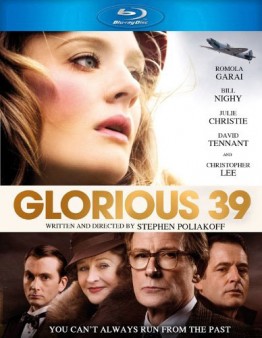 On the eve of World War II as the formidable Keyes family tries to uphold their traditional British way of life, eldest daughter Anne (Romola Garai, The Other Man) sees her life dramatically unravel when she stumbles upon sinister, secret recordings of a pro-Hitler appeasement movement in GLORIOUS 39, the Hitchcockian thriller from Stephen Poliakoff (Gideon’s Daughter).

Anne Keyes (Garai) is an attractive young woman who is enjoying modest success as a film actress; she’s also the adopted daughter of Alexander Keyes (Bill Nighy, Underworld), a career politician and Member of Parliament.  Anne still lives in the family home with her father, mother Maud (Jenny Agutter, An American Werewolf in London, Logan’s Run), budding diplomat brother Ralph and socialite sister Celia (Juno Temple, Atonement).   One night, Hector (David Tennant, “Dr. Who”, St. Trinian’s 2), one of Alexander’s friends, stops by for dinner and during a heated conversation makes no secret of his disapproval of prime minister Neville Chamberlain and his efforts to appease Hitler’s Nazi regime.   Later that evening, Hector is found dead of an apparent suicide.  Anne, however, begins to suspect foul play when she finds a set of phonograph records that document conversations of men discussing state intelligence secrets.  When Anne ties to share this discovery with others, they’re soon found dead as well, in this “ripping, old school conspiracy thriller[1]”, an official selection at the 2009 Toronto International Film Festival.