Putting aside the headache inducing philosophical and scientific discussions about dimensions and the Universe, A&E Home Video Entertainment has detailed the forthcoming release of their first Blu-ray 3D title, an episode from the popular History Channel series The Universe. The title, The Universe: 7 Wonders of the Solar System 3D, is set to be released on January 11, 2011 at a suggested retail price of $29.95.  The disc will be compatible with both 2D and 3D Blu-ray playback systems. 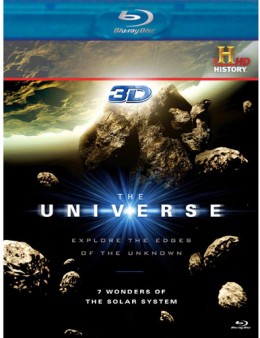 TAKE AN EXHILARATING, UNPRECEDENTED TOUR OF THE SEVEN MOST AMAZING WONDERS OF OUR SOLAR SYSTEM AS THE #1 SELLING HISTORY FRANCHISE EXPLODES IN 3D!

We are in the midst of the greatest era of space discovery. Twenty first-century spacecraft and sophisticated imaging technology are venturing into uncharted territory every day, and much of the extraordinary phenomena are happening right in our own cosmic backyard.  Now, For the first time ever, take an exhilarating 3D voyage into the cosmos – you’ve never seen THE UNIVERSE like this with THE UNIVERSE 3D: 7 WONDERS OF THE SOLAR SYSTEM!

Marrying the groundbreaking, CGI-laden #1 selling HISTORY franchise with cutting-edge 3D technology, this incredible program – destined to be a 3D stand-out as the new format gets underway – THE UNIVERSE 3D brings viewers an unprecedented tour of the seven most amazing wonders of our solar system, beginning with a trip to Enceladus, one of Saturn’s outer moons, where icy geysers spout from its surface. Then venture to Saturn’s famous rings, which contain mountain ranges that rival the Alps; dive into Jupiter’s Great Red Spot, the eye of the biggest storm in the solar system; soar through the asteroid Belt, made of millions of rocks left over from the formation of the solar system; trek up Mount Olympus, the largest volcano located on Mars; have a close encounter with the searing surface of the sun; and finish the journey by exploring our very own home – planet Earth.

Playable on both 3D and standard blu-ray players (but only viewable on a 3D TV), THE UNIVERSE 3D will deliver viewers to the edge of the universe like never before!