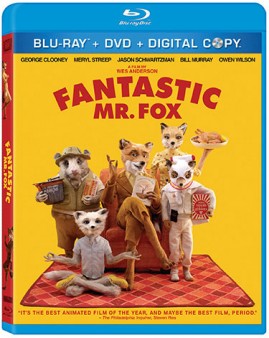 LOS ANGELES, CA. – Academy Award®-winning* Hollywood heavyweights George Clooney (Up In The Air) and Meryl Streep (It’s Complicated) lend their voices to the hilarious, heartwarming and dazzling stop-motion animated adventure from visionary director Wes Anderson (The Royal Tenebaums) Fantastic Mr. Fox, arriving as a Blu-ray Disc/DVD Combo Pack and on DVD March 23 from Twentieth Century Fox Home Entertainment.  In there-imagined classic family tale, Mr. and Mrs. Fox (Clooney and Streep) live a happy home life with their eccentric son Ash (Jason Schwartzman: The Darjeeling Limited) and visiting nephew Kristopherson.  That is until Mr. Fox slips into his sneaky, old ways and plots the greatest heist the animal world has ever seen.  When mean old farmers Boggis, Bunce and Bean join forces to surround Mr. Fox and his family, they don’t realize they are not dealing with any old fox – it’s Fantastic Mr. Fox and he has a fantastic master plan to save the day!

Based on the beloved best-selling book by Roald Dahl (Charlie and the Chocolate Factory), Fantastic Mr. Fox is family fun at its finest. Anderson employs a colorful supporting cast to bring his eccentric characters to life including Bill Murray (Lost In Translation), Owen Wilson (Marley & Me) and Willem Dafoe (Spiderman triology).  Packed with behind-the-scenes bonus features, including a special inside look at how stop-motion animation really works and much more, Fantastic Mr. Fox will be available as a Blu-ray Disc/DVD Combo Pack (Blu-ray, DVD and a Digital Copy**) for the suggested retail price of $39.99 U.S. / $49.99 Canada and available on standard DVD for $29.98 U.S. / $43.48 Canada.  Prebook is February 24.