The Following: Season One on Blu-ray Combo Pack in January 2014

Warner Bros. Home Entertainment has officially announced the release of the FOX network thriller/drama series The Following: The Complete First Season on Blu-ray Combo Pack and DVD for January 17, 2014. The 7-disc combo pack will come with several featurettes and an English DTS-HD Master Audio 5.1 soundtrack. It will sell at a SRP of $49.99. See below for further details.

LOCK YOUR DOORS AND DON’T TRUST ANYONE, AS
WARNER BROS. HOME ENTERTAINMENT RELEASES

THE FOLLOWING: THE COMPLETE FIRST SEASON

Includes All 15 Episodes Plus Over 3 Hours of Bonus Features 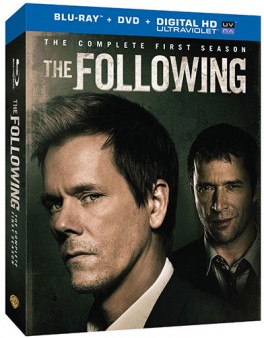 BURBANK, CA (October 3, 2013) – Almost as dedicated as Joe Carroll’s “followers,” television fans tuned in each week for the premiere season of The Following, making it the highest-rated new program of the 2012–13 television season. Now, fans can relive the thrills as Warner Bros. Home Entertainment (WBHE) releases The Following: The Complete First Season on DVD and Blu-rayTM Combo Pack January 7, 2014. An instant hit with viewers, The Following ranked as the #1 drama series (new or returning) on all of network TV among Adults 18-49! The Following: The Complete First Season includes all 15 suspenseful episodes and is available to own for $39.98/$49.99 SRP.  The release includes over three hours of bonus content including five behind-the-scenes featurettes, unaired scenes, a season finale commentary and more.

Golden Globe winner/Emmy® nominee Kevin Bacon and James Purefoy (Rome) star in this terrifying thriller from Kevin Williamson (The Vampire Diaries, Scream) about an escaped serial killer, Joe Carroll (Purefoy), and the psychologically scarred ex-FBI agent, Ryan Hardy (Bacon), who returns to stop him. Working closely with an FBI team, including cult-specialist Debra Parker (Annie Parisse) and sharp upstart Mike Weston (Shawn Ashmore), Hardy unearths that Carroll was covertly communicating with a network of followers while in prison. Challenged with an ever-growing web of murders orchestrated by the diabolical Carroll, the FBI quickly learn that they are up against not one, but an entire cult of killers.

“The Following: The Complete First Season DVD & Blu-Ray Combo Pack is one of our most highly-anticipated titles for 2014,” said Rosemary Markson, WBHE Senior Vice President, TV and Special Interest Marketing. “Fans will get to re-live their favorite suspenseful and chilling moments from season one, while enjoying over 3 hours of unbelievable bonus features.”