Gnomeo & Juliet on Blu-ray and Blu-ray 3D in May

Burbank, Calif., April 1, 2011 – This coming summer to the U.S., don’t miss the chance to bring
home GNOMEO & JULIET – the hilarious twist on William Shakespeare’s legendary tale Romeo &
Juliet as you’ve never seen it before, perfect for the whole family.  Enter the secret world of garden
gnomes and meet two adorable gnomes from completely different worlds who fight the odds to be
together.  From a director of Shrek 2, and featuring fun, all-new music by Sir Elton John, the out-
of-the-ordinary animated comedy GNOMEO & JULIET releases on Blu-ray™, Blu-ray 3D™, DVD,
Movie Download and On-Demand – May 24, 2011. 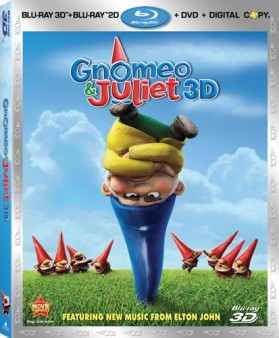 And for those who enjoy to learn more about the making of the film, GNOMEO & JULIET discs come enclosed with never-before-seen bonus features including “Elton Builds A Garden,” “Frog talk with Ashley Jensen,”, “Crocodile Rock Music Video featuring Elton John and Nelly Furtado.” And for those who purchase the Blu-ray Disc, it includes hours of extra exclusive bonus features including alternate endings, deleted scenes and more.

Film Synopsis:
From a director of Shrek 2 comes your chance to step into the secret world of garden gnomes — Gnomeo & Juliet. Perfect for the whole family, this fresh and funny makeover of one of the world’s most timeless stories features music from Sir Elton John, and the voice talents of Emily Blunt, James McAvoy and Sir Michael Caine. Caught up in a feud between neighbors, Gnomeo and Juliet must overcome as many obstacles as their namesakes. But with flamboyant pink flamingos and epic lawnmower races, can this young couple find lasting happiness? Complete with hilarious never-before-seen bonus features, Gnomeo & Juliet is an out-of-the-ordinary animated comedy your entire family will love. We just gnome it!

Join the Discussion on Or Forum