House: Season Six Announced for Blu-ray in the UK

Universal Playback will be bringing House to Blu-ray for the first time in the UK with the release of House: Season Six on Blu-ray September 27, 2010 at a suggested retail price of £44.99.

The 5-disc Blu-ray set will feature: 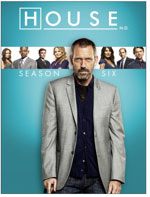 NEW FACES IN A NEW HOUSE (6-8 MINUTES): “Broken”, the 2-part episode, which kicked off Season 6, featured none of the regular stars of HOUSE other than Hugh Laurie.  In this featurette we’ll discuss the challenges and opportunities that are presented when a show must hire more than 30 new actors to perform pivotal roles in an extremely important episode.