For their inaugural release, Midnight Legacy is presenting the first-ever widescreen release of Alien 2 On Earth. It will be the first time the 1980 Italian Sci-Fi/Horror film will be released in the United States. The uncut, English language, 1.85 widescreen release of the film directed by Ciro Ippolito (Sam Cromwell), is coming to DVD and Blu-ray on March 22. The Blu-ray will have a suggested retail price of $29.95. 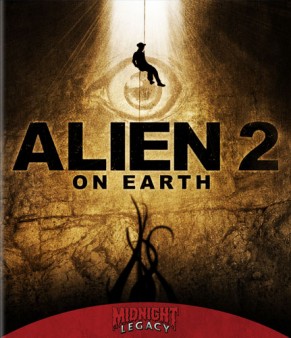 Classic Italian Horror / Sci-Fi Film Never-Before-Released in the United States
For their inaugural release, Midnight Legacy is presenting the first-ever widescreen release of Alien 2 On Earth. The uncut, English language, 1.85 widescreen release of the 1980 Italian Horror / Sci-Fi film directed by Ciro Ippolito (Sam Cromwell), is coming to DVD and Blu-ray on March 22.

This film has never been released in the United States… Only a handful of countries saw a cropped and edited VHS release nearly thirty years ago. This definitive version, transferred from the original 35mm negative, runs longer than any other version seen throughout the world. It is the presentation that finally represents the intended vision of Alien 2 On Earth.

“We are immensely pleased to have partnered with MVD as it presents a strong opportunity for strategic market penetration for our releases with a distributor who shares our vision for preserving and delivering films of the highest technical quality,” said Dolph Chiarino, Co-Founder of Midnight Legacy. “MVD possesses a rather unique model within key business sectors bringing Midnight Legacy titles to the broadest possible audience.”

For the past 10 years, Chiarino and Bill Knight (founders of Midnight Legacy) has been the go-to people for independent genre labels to release European horror and sci-fi titles on DVD. Whether it is to provide elements, ensure a title was uncut, or to advise what titles would be choice candidates, their knowledge proved to be quite lucrative for companies such as Anchor Bay, Blue Underground, Synapse, Media Blasters, and quite a few others.

“When we started this venture, we knew we had to be fully committed to going the distance when preserving many rare films without the typical cost cutting procedures employed throughout the industry,” said Chiarino. “A rather distinctive hands-on approach encompassing personally supervising the transfer work in Rome, the disc work here, and simply building relationships with some of the most respected film and post-house individuals that share our vision. These are all key facets that deliver a measurable benefit to the viewer. As far as we are aware, we are the only genre company creating Digital Intermediates (DIs) for all of our titles. The results are more of a major restoration rather than simply a “new” transfer, and it certainly is visible to our viewer base.”

Midnight Legacy’s most fundamental principal was to establish a trust between the consumer and the brand… One that ensures all titles are fully uncut, properly framed, and presented in a definitive version of the absolute highest quality. With over 23 years experience dealing in these types of films, Midnight Legacy is proud to bring many rarely seen titles to the their collection. They pride themselves on respecting the original intentions of the filmmakers, and preserving the legacy these films have created.

“MVD is proud to represent Midnight Legacy,” said Ed Seaman, COO of MVD Entertainment Group. “Between the classic content they are uncovering and their commitment to excellence, they separate themselves from the pack. MVD has a lot of experience representing classic horror, and Alien 2 On Earth is a great start with Midnight Legacy, particularly considering the great job they have done with the restoration, transfers and packaging.”

A group of cave explorers are confronted in an underground cavern by a mysterious living rock. Little do they know that it bears home to deadly, flesh-eating creatures, intent on wiping out the entire human population. Can they survive and ultimately prevent earth’s total annihilation? The film stars Belinda Mayne, Mark Bodin, Roberto Barrese, Benny Aldrich, Michele Soavi and Judy Perrin.

– Ultra high bitrate AVC encode @36 MBS, on a BD-50, faithfully representing our 2k scan and preserving the integrity and look of film.

– Special features include the only surviving trailer from the mega rare Dutch VHS , and effects outtakes transferred  directly from the negative B-roll in full HD.